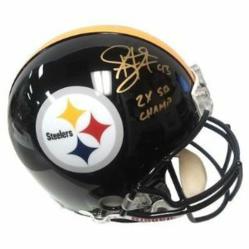 Pittsburgh Steelers NFL apparel and various NHL apparel and accessories are marked down up to 90% through the end of April at SportsFanPlayground.com.

The Pittsburgh Steelers hold the record for most Superbowl championships won in history with six, and the Sports Fan Playground has a variety of items that commemorate the current players and past success of the Steelers organization.

The store has a variety of tailgating items available at up to 60% off of the retail price, including the "Terrible Towels", bobbleheads, home and garden items, hats, t-shirts, jerseys of top players including Troy Polamalu, Ben Roethlisberger, Rashard Mendenhall, and others.

The Sports Fan Playground also announced on Monday that the store will begin offering authentic NHL Original Six apparel and memorabilia at reduced prices. The NHL Original Six teams consist of the first teams to be in the modern-day NHL, which consists of the Boston Bruins, Chicago Blackhawks, Toronto Maple Leafs, Detroit Red Wings, New York Rangers and Montreal Canadiens.

The available Original Six gear on sale includes hats, t-shirts, hoodies, and banners. The store has a variety of apparel marked down up to 50% off on the Original Six gear that is themed toward particular teams and markets that are specially themed for those organizations.

The Playground will offer the deals on the NHL specialized apparel through the rest of the NHL season and through the finish of the Stanley Cup Finals in June.

The store has a variety of hockey sports equipment available for recreational use for leagues and for those who play the game for fun. Items available include skates, pucks, practice jerseys, helmets, visors, gripes, tape, and equipment bags, among other hockey products. Items are available for men, women, boys and girls.

Along with the SportsFanPlayground.com website, the store also recently launched the new Development-shop.com website, which specializes in the sale of IT solutions for small business and enterprise companies, as well as consumers. Items available include modems, routers, switches, adapters, cables, computer cases, speakers, cooling fans, office products, furniture, laptop computers, desktop PCs, memory, memory cards, and more from companies such as Cisco, HP, Lenovo, Apple and others.