Twenty-four years after he was nearly killed by a drunk driver while walking on a spring break trip in Florida, the attorney from Davis, Saperstein & Salomon, P.C., continues his mission to end drunk driving and inspire those suffering from catastrophic injuries. 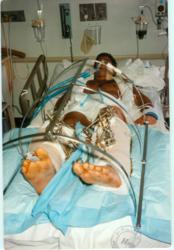 New Jersey personal injury lawyer Steven Benvenisti was in a coma for 10 days after he was struck by a drunk driver while on a college spring break trip in Florida in 1989.

As a lawyer, Benvenisti has focused on representing personal injury victims, including those harmed by drunk drivers and those suffering from traumatic brain injury (TBI) and spinal cord injuries.

On March 20, 2013, Benvenisti sent an e-mail message to friends and colleagues, including those from his Facebook friends list, to inform them that he was gifting $1 on behalf of each and every one of them to Mothers Against Drunk Driving (MADD) and the Brain Injury Alliance of New Jersey.

“I am honored to have you as being part of my life today,” Benvenisti said in his e-mail message, adding at the end, “It’s great to be alive.”

On March 20, 1989, Benvenisti was a college student on a spring break trip, walking along the road in Daytona Beach, Florida, when a drunk driver plowed into him.

The accident crushed both of his legs and put him in the hospital for six months. He was in a coma for 10 days, and he endured 15 surgeries and intense rehabilitation before fully recovering. He went on to become a partner with the New Jersey personal injury firm of Davis, Saperstein & Salomon, P.C., as well as a highly acclaimed speaker.

As a lawyer, Benvenisti has focused on representing personal injury victims, including those harmed by drunk drivers and those suffering from traumatic brain injury (TBI) and spinal cord injuries.

As a speaker, Benvenisti has presented programs to students, law enforcement personnel, medical professionals, attorneys’ groups and judicial officials across the country, discussing his life’s mission to end drunk driving and to inspire those struggling with catastrophic injuries.

In 2012, Benvenisti published Spring Break: A True Story of Hope and Determination, which he describes as the story of the “most significant case” of his career – his injuries, recovery and work to end impaired driving.

One hundred percent of all honorariums and proceeds from his programs as well as from his book are waived and donated directly to MADD and the Brain Injury Alliance of New Jersey.

“He continues to be a major contributor to the fight against drunk driving and to serve as an inspiration to those recovering from devastating injuries,” said Garry R. Salomon, a partner with Davis, Saperstein & Salomon, P.C.

To learn more about Benvenisti’s availability as a speaker or to obtain a copy of his “Contract for Life,” please contact him by e-mail at Steven.Benvenisti(at)dsslaw(dot)com or call (201) 907-5000.

The New Jersey personal injury attorneys and dedicated staff of Davis, Saperstein & Salomon, P.C., provide compassionate and skilled legal help to those injured by the negligence of others. Since 1981, the firm has secured more than $350 million in verdicts and settlements for clients throughout New Jersey and New York. The firm’s practice areas include personal injury, auto accidents, drunk driving accidents, motor vehicle accidents, medical malpractice, premises liability, product liability, slip and fall, truck accidents and workers’ compensation. The firm’s Teaneck office is located at 375 Cedar Lane, Teaneck, NJ 07666. For more information, call (800) LAW-2000 or use the firm’s online contact form.