Orange County SEO Company provides analysis on the social media wildfire resulting from the North Korea nuclear threats. In their analysis, Orange County SEO concludes varying sentiment regarding the threats, with many communities responding both passionately and dismissively. 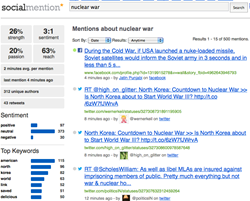 North Korea nuclear threats are received with varying views of skepticism and scare.

In a meta-analysis across multiple social media platforms, including Twitter, Reddit, Facebook, and more, Orange County SEO has determined public responses to the North Korean nuclear threat are largely neutral or positive, choosing to dismiss North Korea's words as rhetoric and propaganda. While some communities warn against the danger of dismissing the threats, public sentiment was measured expressing 31% passion, 27% strength regarding positive and jovial messaging. As many news organizations largely held that citizens were concerned about North Korea's nuclear threat, the trend analysis of social media has revealed that individuals have largely expressed disbelief, joking in tweets such as that from @YaBoyJesus "North Korea, eat a Snickers. You get a little nuclear terroristic when you're hungry." Other tweets included similar sarcasm and jest such as @Sweet_Bombaclot "It's not as bad as the news is making it.. North Korea been threatening us forever.. They ain't bout that life."

CEO, Tyler Collins, states "North Korea is notoriously secretive and their media is largely a vehicle for propaganda. In a nation closed off from the Internet and globalized society, it is no surprise that this messaging is largely from English-speaking citizens of industrialized nations such as the US, Canada, and the UK. Our research indicates people are dismissing this as more propaganda from a nation whose news outlets claim to have found the remains of unicorns."

A search engine optimization & web design company in orange county, California, with more than a decade of experience helping businesses across the country maximize their marketing capabilities through SEO services, content marketing and copy-writing services, local internet marketing, and pay per click account management. Now Orange County SEO has added the latest in social media marketing and reputation management to better serve their customers. To obtain these powerful resources, consumers are encouraged to call (866) 592-5115 or visit the address or website below.