It's a Wonderful Light in Seneca Falls 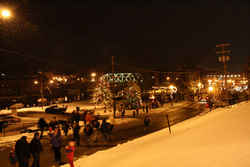 The 5,400 LEDs that light up Seneca Falls will save the village about $4,000 on its electric bill each year they are used.

It's a Wonderful Life

Seneca Falls, believed to be the real setting for the classic holiday film "It's a Wonderful Life," commemorated this connection on Friday, December 12 with an annual celebration. Karolyn Grimes, who played Zuzu Bailey in the film, served as special guest and honorary host, flipping the switch on the town's new holiday lighting.

With help from the New York State Energy Research and Development Authority (NYSERDA), the village made this year's festivities greener by unveiling 5,400 energy-efficient LED decorative lights that will save Seneca Falls about $4,000 each year they are used. Even the town's steel truss bridge, so familiar to film buffs, will sparkle for the holidays, using 75 percent less energy than if it were decked out with conventional incandescent light strands. Other activities included a parade, caroling, train rides with Santa and a Victorian Christmas Tea.

The New York State Energy Research and Development Authority (NYSERDA) uses innovation and technology to solve some of New York's most difficult energy and environmental problems in ways that improve the State's economy.

The Seneca Falls bridge, a familiar icon from the movie "It's a Wonderful Life", glows with LED holiday lights.

The 5,400 LEDs that light up Seneca Falls will save the village about $4,000 on its electric bill each year they are used.