Since the White House published the recipes for President Barack Obama's homemade beers enlightening the public to the executive branch's fondness for honey-flavored beer and ale, sales for raw honey increased overnight at the Mohawk Valley Trading Company. 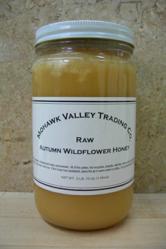 Due to pressure from the beer imbibing public to “Release the recipe for the Honey Ale home brewed at the White House.”, on September 01, 2012 White House Assistant Chef and Senior Policy Advisor for Healthy Food Initiatives Sam Kass said in a blog post entitled "Ale to the Chief" that "with public excitement about White House beer fermenting such a buzz, we decided we better hop right to it."

The Mohawk Valley Trading Company offers the highest quality unprocessed natural products they can produce. Their raw honey and maple syrup is used and endorsed by two of by the world’s most recognized chefs: Bobby Flay recommends their maple syrup and Tom Colicchio recommends the honey. Not only does Tom say their honey is one of his “Personal Pantry Essentials” and “Favorite Gifts” but he also keeps “a jar of the stuff on my desk at all times.”

Although the Mohawk Valley Trading Company specializes in raw honey, they also offer liquid honey for those who prefer it.

Their raw honey is not heated, filtered, blended or processed. All of the pollen, enzymes, propolis, vitamins, amino acids, antioxidants, minerals and aromatics are in the same condition as they were in the hive.

"To be honest, we were surprised that the beer turned out so well since none of us had brewed beer before," Kass wrote "honey gives the beer a rich aroma and a nice finish but it doesn't sweeten it."

“That post sparked an interest in artisanal honey with home brewers and our sales have increased as a direct result of that.” Ross added.

Honey has been used by humans since ancient times for its health benefits and as a sweetener and flavoring for many foods and beverages with tea being the most popular. The flavor and color of honey is determined by the type of flower the bees gather the nectar from. Dark colored honey is considered to be higher in minerals and antioxidants than light colored honey and one of the most well known dark colored honeys is buckwheat honey. Raw buckwheat honey contains a higher amount of minerals and an antioxidant called polyphenol, which gives it its dark color.

Honey is a healthy alternative to refined sugar, however when cooking or baking with honey, it is not necessary to use raw honey since the heat destroys the all of the pollen, enzymes, propolis, vitamins, amino acids, antioxidants, minerals, and aromatics. Since the flavor and color of honey is determined by the type of flower the bees gather the nectar from, it is a good idea to taste the honey before using it in a recipe. For example; a dark honey like buckwheat honey will result in a strong, heavy, a pungent flavor, whereas orange blossom honey will result in a delicate orange flavor.