Rich Christiansen, author and entrepreneur credited with the creation of more than 30 companies, offers his insights on President Obama's American Job Act. The Zig Zag Principle, subject of his upcoming book by the same name, provides Americans a simple and clear pathway to income and wealth creation. 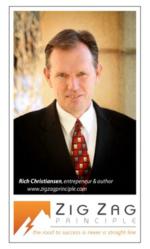 And there’s no time like now for Americans to start being entrepreneurs. Entrepreneurship is a great life. Americans can do it. Americans should do it.

Rich Christiansen, author of the upcoming business book The Zig Zag Principle, has just one request for President Obama regarding the American Jobs Act: let the entrepreneurs work.

“There’s only one way we’re going to recover from this economic disaster, and it comes on the backs of American entrepreneurs,” Christiansen said. “Entrepreneurs have the most profound impact on jobs. But when the government starts influencing jobs, you get jobs that are not sustainable.”

Christiansen, a former technology executive who has built more than 30 businesses, believes that the economy will recover on the backs of entrepreneurs and small businesses, not government programs.

“Being an entrepreneur is a hard journey, but it’s the only chance we have to recover this crazy economy,” Christiansen said. “And there’s no time like now for Americans to start being entrepreneurs. Entrepreneurship is a great life. Americans can do it. Americans should do it.”

As a seasoned entrepreneur himself, Christiansen is well aware of the risks entrepreneurship brings, but has developed a strategy that helps people get to self-reliance in their careers and take control of their lives without putting his entire future in jeopardy or waiting for President Obama’s American Jobs Act.

“The Zig Zag Principle is the best I have,” Christiansen said. “It’s how my businesses succeed: by not going directly to my goal. Zig zagging is a law of nature, and this book shows how it works in business.”

“This thoughtful and inspired book will guide creative and energized business men and women to accomplish their loftiest dreams and restore America's prosperity once again,” said Alan Hall, venture capitalist and co-founder of Mercato Parners. “Our economy will be saved and grow again through the industry of focused entrepreneurs who will hire thousands of employees to meet the needs of customers.”

However, Christiansen is supportive of Obama’s efforts.

“I really appreciated him stating that they have to make some hard choices,” Christiansen said. “It’s such a contrasting statement to what he said in his campaign when he claimed we could have it all. He publicly zig zagged, and I take my hat off to him for that.”

But rather than waiting for someone else to make a job for them, Christiansen hopes learn how to find their dream jobs.

“I think the best strategy, once again, is a zig zag strategy,” Christiansen said. “We don’t have to charge at all of this at once and solve it in one fell swoop. Let’s take one major component and get that taken care of and we’ll have a much higher probability of success. Zig Zag Principle is a fundamental, true concept. But as for President Obama’s American Jobs Act? I’m hopeful something will be done, but I don’t hold my breath.”

The Zig Zag Principle is available for pre-order. Learn how to get Americans back to work.

About Rich Christiansen
Rich Christiansen describes himself as “a perfectly good technology executive turned entrepreneur.” He is the CEO of The Storm Group has founded or co-founded more than 32 businesses, each with less than $10,000. Before becoming an entrepreneur, Rich was known for his successes at Mitsubishi Electric, About.com and Novell. He is the author of The Zig Zag Principle (2011) and co-author and publisher of Bootstrap Business: A Step-by-Step Business Survival Guide (2009). Rich currently resides with his wife and five sons in Spanish Fork, Utah.