New book follows the Guyana history from the period of European colonization to its attainment of independence. 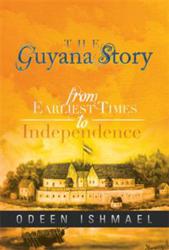 By knowing about the past, people will be in a better position to understand and appreciate the present. Author Odeen Ishmael presents the progression of Guyana history and development through his valuable publication, The Guyana Story. It features the earliest times to Independence, tracing the country’s history from thousands of years ago when the first Amerindian groups began their settlement in the Guyana territory.

The book examines the period of early European exploration leading to Dutch colonization and the forcible introduction of African slaves to work on cotton and sugar plantations. It also scrutinizes the effects of European wars, and the final ceding of the territory to the British who ruled it as their colony until they finally granted it independence in 1966. It includes the Indian, Chinese, and Portuguese indentured immigration, showing how the cultural interrelationships among the various ethnic groups introduced newer forms of conflict but at the same time, brought about cooperation in the struggles of the workers for better working and living conditions.

The final part describes the roles of the political leaders who arose from among these ethnic groups from the late 1940s and began the political struggle against colonialism and the demand for independence. This struggle led to political turbulence in the 1950s and early 1960s when the country was caught in the crosshairs of the cold war resulting in joint British-American devious actions that undermined a democratically elected pro-socialist government and deliberately delayed independence for the country until a government friendly to their international interests came to power.

Educational and highly enlightening, The Guyana Story is a collection of short essays attempting to relate the story of the Guyanese people in a generally chronological order. These will give the readers a wonderful insight into the rich heritage of the country, and will continue to encourage others to conduct and document further research into various aspects of Guyanese history.

About the Author
Odeen Ishmael, a veteran Guyanese diplomat, is currently Guyana’s ambassador to the State of Kuwait. He previously served as ambassador to Venezuela (2003–2011) and to the United States of America (1993–2003), where he was also his country’s permanent representative to the Organization of American States. He has written extensively on Guyanese history, education, and culture as well as political developments in Latin America and the Caribbean and particularly on the political integration movement in South America. His country decorated him with the Cacique Crown of Honor in 1997, and in the USA in 2002, he was honored with the Martin Luther King Legacy Award for international service.