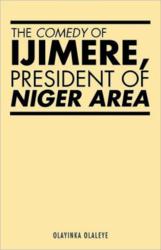 is how Africans lack sensible manners of choice making when it comes to election situation.

Author Olayinka Olaleye, announcing the publication of his new play “The Comedy of Ijimere, President of Niger Area” (published by Trafford Publishing), cites Harold Pinter and Samuel Beckett as his influences, and offers his new book as an entrant into the theater of the absurd.

In “The Comedy of Ijimere, President of Niger Area,” Olaleye explores complex issues of voter fraud, election buying and more. On becoming the interim president, Ijimere arranges a loan with the Global Bank to run the general election. Will he be able to make a positive influence on the general election? His only hope lies in seeking a fortune-teller. What will it cost him to consult the sisters of the sacred river?

Throughout the play, Olaleye has his characters depict a way of leadership and management in which violence, intimidation, thuggery and fraudulent acts are employed. “The central point of my book,” he says, “is how Africans lack sensible manners of choice making when it comes to election situation.”

The author explains his reason in this preface to the book:

“The stimulus for this drama is psychological and political settings. I have presented a democracy in which the citizenry cannot make a rational choice. The problem of African democracy lies in choice making and how to form a genuine society. I have employed local references, traditional images, and symbols that distinguish Africa from other part of the world. The comedy of Ijimere, President of Niger Area is in conformity with African Heritage.”

“The Comedy of Ijimere, President of Niger Area” is available now from online booksellers.

About the Author
Olayinka Olaleye, born in 1985, is a student at the University of Lagos. He is a literary craftsman who writes poem and drama to entertain the public.