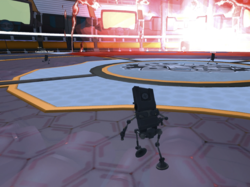 In-game footage of a player dodging a bomb in DodgeBots.

Gaming start-up Will Pwn 4 Food announced today the official launch of its first game entitled DodgeBots, a fast action, 3D game that allows gamers to play right in their browser, and make money while they play. DodgeBots is set to launch on the web on March 4th, 2013.

With the fan base of eSports growing at a rapid pace over the last few years, more and more gamers are trying to figure out how they can make money while playing the games they love.

Within the time it takes to load the average console game, or find a StarCraft 2 match, DodgeBots players can jump into a game and start competing with others. No teams involved; no scheduling required; and no downloads -- just pure fun in short manageable – and potentially profitable matches!

DodgeBots was developed through Communitech’s HYPERDRIVE tech start-up incubator program and is led by former BlackBerry employee Ivan Lukianchuk. After graduating from the incubator and receiving a great deal of positive feedback from the community, Lukianchuk decided to push the project forward at full speed in hopes of making a game that helped break the eSports genre wide open. With today’s launch of DodgeBots, Lukianchuk strongly believes he has accomplished this goal. For the very first time, gamers are now able to play online games for money, just like they see others do on TV. All of the normal restrictions of having to be a professional or schedule matches are finally gone and gamers are now free to either watch the professionals play for money, or do it themselves!

Describing the idea and process behind the creation of DodgeBots, Lukianchuk says, “We wanted a game that was simple and short, but that would provide an adrenaline packed experience that would make your heart pound and your hands shake. We combined the fast action dodging of Unreal Tournament with the insanity and instinct driven nature of sudden death Bomberman matches. What resulted is a game that allows players with the most skills to outlast those who can't handle the pressure, and reap the resulting rewards.”

Connect with us on social media: