The new video is presented by Coast 2 Coast Video Promotion 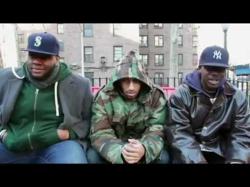 Coast 2 Coast Mixtapes announce the release of the new video “OOAK EPK" by One Of A Kind. The video presented by Coast 2 Coast Video Distribution is now available for view on YouTube.

Hailing from the New York Tri-State Area, One Of A Kind is a group that has taken all of their unfortunate circumstances growing up and channeled them into their music. Comprised of artists CP, Deacon, Big Lee and Ms. Ripa, OOAK is determined to prove they are the indie group you should be watching.

Influenced by many music pioneers including Michael Jackson, Anita Baker, Marvin Gaye, Stevie Wonder, Biggie, Kool G Rap, Lauryn Hill, and Queen Latifah, OOAK hopes to touch people with their music like these artists have. They work hard to make music that is timeless by staying in their own lane. Their style combines old and new school sounds which make projects unique.

To date, OOAK has accomplished many feats including performing around the country, dropping their first mixtape, releasing their first music video, and winning several music showcases. The group will be dropping an album toward the end of the year and throughout the year members will be releasing solo projects. Watch the “OOAK EPK” now.