Solver Platform SDK V10.0 Solves Excel Optimization and Simulation Models on Servers or in the Cloud

Frontline Systems is shipping Solver Platform SDK V10.0, the latest version of its software development kit for optimization and simulation applications, with support for 32-bit and 64-bit Windows and Linux. A major new feature of the SDK V10.0 is the ability to load Excel workbooks containing optimization and simulation models, and solve them anywhere, from desktop to server to cloud. It's available for download from http://www.solver.com. 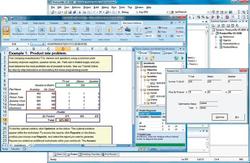 Users want to develop and test their optimization and simulation models in Excel on their desktop PCs, but deploy them on an Intranet or Web server, and now in the cloud. We've made that kind of deployment super-easy.

Frontline Systems is shipping Solver Platform SDK V10.0, the latest version of its software development kit for optimization and simulation applications, with support for 32-bit and 64-bit Windows and Linux. A major new feature of the SDK V10.0 is the ability to load Excel workbooks containing optimization and simulation models, and solve them anywhere, from desktop to server to cloud. It's available for download from http://www.solver.com.

Frontline is best known for developing the Solver in Microsoft Excel, and for its Solver upgrade products such as Premium Solver Platform and Risk Solver Platform, which enable users to solve problems hundreds to thousands of times larger than the standard Excel Solver, at speeds up to hundreds of times faster. But for years, Solver Platform SDK -- which is used outside Excel in a programming language -- has been Frontline's second best-selling product. The SDK supports development of optimization and simulation applications in C/C++, C#, Visual Basic and VB.NET, Java, and MATLAB.

Now the two product lines have come together: Solver Platform SDK V10.0 can load Excel workbook models created with Risk Solver Platform V10.0 and Premium Solver Platform V10.0, and solve these large-scale optimization and simulation models almost anywhere -- from a .NET application running under Windows Server 2008 or SQL Server to a CGI for an Apache Web server under Linux. This gives users unprecedented flexibility to develop and deploy applications.

"Many users want to develop and test their optimization and simulation models in Excel on their desktop PCs, but deploy them on an Intranet or Web server, and now in the cloud," said Daniel Fylstra, founder and president of Frontline Systems. "With Solver Platform SDK and Risk Solver Platform V10.0, we've made that kind of deployment super-easy."

The secret to Solver Platform SDK's ability to load and solve complex Excel models is its integration of Frontline's PSI technology, which the company has been developing for ten years. PSI stands for Polymorphic Spreadsheet Interpreter, so-called because it interprets Excel formulas over several domains, much like polymorphism in modern object-oriented programming languages. For example, when performing a Monte Carlo simulation, PSI technology evaluates arrays of Monte Carlo trials in parallel, even though the Excel spreadsheet calculates one trial at a time. This feature -- one of many in PSI technology -- makes Monte Carlo simulation up to 100 times faster than using Excel alone.

For the user, PSI technology is "under the hood" -- he or she simply loads an Excel workbook with one line of code, solves the optimization or simulation model with one more line of code, and updates input values and accesses results via a simple object-oriented API, using objects such as a Problem, Solver, Variables and Functions. But PSI technology has been proven in use on many tens of thousands of customer models, not only in Frontline's products for 10 years, but in Oracle's Crystal Ball software for the past 5 years.

SDK Exploits Multiple Cores Without Any Work from the User

The application developer does not have to write code for multiple threads of execution, synchronization and the like -- the hard work of parallel programming. He or she simply writes ordinary sequential code to evaluate the optimization or simulation model for one set of input values. And when using the SDK's ability to load an Excel workbook containing the model, even this code is not required. Solver Platform SDK automatically handles division of the work and assembly of results across multiple threads, as well as synchronous access to the SDK's object model.

Solver Platform SDK offers deep support for Microsoft .NET, COM and Java. The SDK V10.0 supports Microsoft Visual Studio 2010 and .NET Framework 4.0, as well as several earlier Visual Studio and .NET versions back to 1.1. The SDK offers IntelliSense Help for its object-oriented API, in Visual Studio, Visual C++, Visual Basic 6 and Excel VBA, as well as JavaDoc Help. Linux-based developers can use C++ with the gcc compilers. And the SDK includes deep, cross-platform support for MATLAB®, the popular technical computing language from The MathWorks Inc. All of these platforms can be used to easily build 32-bit or 64-bit applications.

To help developers get up and running quickly, the SDK includes a comprehensive set of nearly 40 examples that show developers how to define and solve every type of optimization and simulation problem -- from linear programming to efficient portfolios and simulation optimization -- in every supported language: C, C++, C#, Visual Basic, VB.NET, Java, and MATLAB.

Frontline is also shipping V10.0 of its family of eight plug-in, large-scale Solver Engines for challenging linear, mixed-integer, quadratic, nonlinear and non-smooth optimization problems, to further enhance Solver Platform SDK V10.0. Several of the world's best optimization Solvers, from Gurobi and Xpress-MP for LP/MIP problems to MOSEK and KNITRO for conic and nonlinear problems, are available in both 32-bit and 64-bit versions. Many users have solved problems with millions of decision variables using these Solver Engines. Unlike other software for optimization and simulation, Frontline's Solver Engines can be used with Excel, MATLAB, Java, all .NET and COM languages, and conventional procedural programming languages -- all for the price of one license.