Orthopedic research studies have concluded that inexpensive off-the-shelf orthotics are more effective for relieving heel and arch pain due to over-pronation than costly custom-made insoles , potentially resulting in significant health care savings for a large segment of the population. The foot care specialists at Footminders USA, in partnership with Footlogics Australia, have designed a line of prefabricated orthotic arch supports for cost-effective relief of many common foot conditions such as plantar fasciitis, heel spurs, Achilles tendonitis, metatarsalgia, and other lower-body ailments that typically result from over-pronation. After successfully relieving foot pain in millions of patients across Europe and Australia, Footminders is proud to introduce its line of foot care products to the USA and Canada markets. 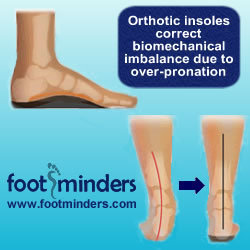 We conclude that, when used in conjunction with a stretching program, a prefabricated shoe insert is more likely to produce improvement in symptoms as part of the initial treatment of proximal plantar fasciitis than a custom polypropylene orthotic device.

Many podiatrists and foot care specialty stores recommend expensive custom-made orthotics costing several hundreds of dollars for patients suffering from heel and arch pain due to plantar fasciitis and other common foot problems. However, these custom devices may not be necessary in most cases according to at least two separate orthopedic research studies. These studies consistently found that inexpensive off-the-shelf orthotic insoles are more effective than custom-made insoles in relieving foot pain.

Fred Salomon, foot care specialist at Footminders, explains the difference: "Custom orthotics are necessary when the patient presents substantial left/right asymmetry, or when the feet have fairly unusual shapes. These cases require the dedicated involvement of a professional, which is why they are so expensive. On the other hand, prefabricated orthotics are designed to fit most common foot shapes, and should provide adequate arch support to relieve foot pain in 90% of the population". The studies described below give credibility to his statement:

An orthopedic research study organized by the San Francisco Orthopedic Foot and Ankle Center of the University of California was conducted at fifteen orthopedic centers, treating 236 patients ages 16 or older, most with plantar fasciitis symptoms for a period of six months or less. The study randomized patients into five different treatment groups who performed Achilles tendon- and plantar fascia-stretching exercises in a similar manner. While one group was treated using stretching exercises only, the other four groups stretched and used one of four different types of shoe inserts: a silicone heel pad, a felt pad, a rubber heel cup, or a custom-made polypropylene orthotic device.

After 8 weeks of treatment, the ratio of patients who reported improvement in each group read as follows:

The researchers summarized their findings by releasing the following statement: "We conclude that, when used in conjunction with a stretching program, a prefabricated shoe insert is more likely to produce improvement in symptoms as part of the initial treatment of proximal plantar fasciitis than a custom polypropylene orthotic device."

In another similar study in 1996, The American Orthopaedic Foot and Ankle Society (AOFAS) in Seattle also conducted a two-year prospective randomized national study on the treatment of heel pain. The study also found inexpensive off-the-shelf shoe inserts to be more effective than custom plastic arch supports in the initial treatment of heel pain due to plantar fasciitis. This finding could potentially save more than $200 million in health care costs annually.

The Footminders product line includes prefabricated orthotic insoles designed to correct biomechanical imbalances of the foot such as over-pronation due to flat feet or fallen arches. This condition can result in serious foot problems over time, such as plantar fasciitis, heel spurs, shin splints, metatarsalgia (ball of foot pain), among others.

Paula Mills-Howell, a Footminders customer from San Jose, California, raves about their products. "I have extremely flat feet and suffered from heel pain due to plantar fasciitis for years. Initially I used a set of $400 custom plastic insoles that my podiatrist recommended. They gave me some relief, but my feet still bothered me. I tried the Footminders products on a friend's recommendation, and I could tell a huge difference after only 5 days. Now I have a set for every pair of shoes; I can't take a single step without my insoles."

For more information on the potential consequences of over-pronation, and how orthotics may help in preventing and relieving serious foot problems, visit their website http://www.footminders.com.