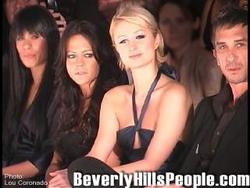 The crowd grew restless waiting an extra 40 minutes for the show to start and then conversations stopped and all eyes turned to see Tochterman finally show up with Paris Hilton on her arm. After Tochterman and Smashbox owner Davis Factor led Hilton to her front-row seat, the show got under way with half the crowd splitting their gaze from the runway models and Hilton, who was wearing a Petro Zillia midnight blue satin jumpsuit of her own.

Paris Hilton seemed relaxed as she held court next to the runway. Hilton later told the Associated Press that she was out of town and had missed her sister Nicki's earlier show at Fashion Week and had only arrived in Los Angeles the night before for Spike TV's Scream Awards and to see Petro Zillia's "great collection."

Usually a New York booster, Tochterman has recently opened her first L.A. store and has begun likening L.A.'s street styles to the inspired looks that influenced her from New York City.

Zillia's Spring collection bounced with bright and lucid colors on dresses either skimming the thigh or skimming the floor and the outfits also were accented by trailing scarves and this season's hit footwear seen elsewhere at Fashion Week: Roman themed sandals and boots.

One standout greeted by clapping and cheers was a gorgeous floor-length teal wrap dress with delicate folds of chiffon worthy of any starlet prepping for the awards show season.

L.A. Fashion Week followed the trends in New York and Milan with the appearance of silk and satin jumpers that came in bright yellow and fuchsia. Belted shorts and flowing wide-legged pants were paired with metallic knitted tops.