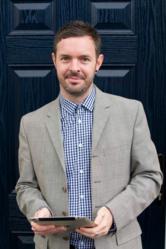 I’m delighted to have been chosen as StartUp Local champion for Northumberland. I set up my first business in 2007, and now I’m addicted! I want to use my knowledge to help extend the enterprise work I do with start-ups.

Paul, who runds digital media projects including http://www.paul-wakefield.co.uk/ Digital Youth Enterprise and Making U Social will be using his position to help develop the work he already does to support the growing number of start-up businesses in the county by organising regular workshops and networking sessions as well as lobbying the [Northumberland Count Council] on issues facing small business.

Paul said: “I’m delighted to have been chosen as StartUp Local champion for Northumberland. I set up my first business in 2007, and now I’m addicted! I want to use my knowledge to help extend the enterprise work I do with start-ups. Help and support in early stages can mean the difference between long-term success and failure."

"Northumberland's small business community needs all the help and support it can get so it can grow and flourish in these difficult economic times. Being the StartUp Local champion means I can offer advice and guidance as well as encouraging others to have the confidence to consider going it alone and starting the business they have always dreamed of.”

[Paul left his job as an Recruitment Consultant in 2007 6 years ago and set up in his back bedroom with an old PC and a tiny printer. Since then he has moved the business into a nearby business centre, taken on three new members of staff. Since 2009 Paul has been written about in the book called 'The Laptop Millionaire', here's trained over 3,000 people via webinars, seminars and workshops.]

StartUp Britain is a national campaign that was launched in 2011 with the aim of encouraging more people to consider starting a business. Since then record numbers of people have been looking to set up businesses. The campaign now has more than 120 local champions who take the campaign to the heart of their local business community.

Campaign founder and director Emma Jones said: “We are really pleased Paul could join our campaign as our local champ for Northumberland. He’s already proved he is an accomplished entrepreneur, so it wasn’t a hard decision to appoint him!"

“He’s got exactly what you need as a self-starter – bags of energy, loads of ideas and real can-do attitude. We know he’ll do a great job and we wish him every success.”