In an ABC Nightline interview, President Bush recently said of Saudi Arabia, "If they don't have a lot of additional oil to put on the market, it is hard to ask somebody to do something they may not be able to do." According to TheOilDrum.com, this statement seems to indicate that George W. Bush, like many others, is skeptical of Saudi oil production claims. Forecasts of future world oil production by official organization like the IEA and the EIA assume OPEC can increase production by any desired amount; if OPEC's capability is limited, official production forecasts are optimistic because they are based on false assumptions. 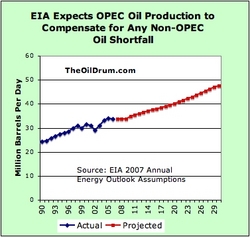 On January 15, Terry Moran interviewed President Bush in Saudi Arabia on ABC's Nightline. When asked what he might say to the King of Saudi Arabia to lower oil prices, George Bush responded, "If they don't have a lot of additional oil to put on the market, it is hard to ask somebody to do something they may not be able to do." Nightline Presidential Interview

One would think that future oil production forecasts by the US Energy Information Administration (EIA) and the International Information Agency (IEA) would be based on something fairly solid -- perhaps a detailed analysis of reservoir capabilities, or at least some type of audited reserve estimates of the different countries.

According to TheOilDrum.com, "Unfortunately, future oil production forecasts by these organizations are really forecasts of how much oil the world is likely to need, not how much can be pulled from the ground. The assumption is made that somehow OPEC will be able to cover any shortfall." The International Energy Association determines how much will be needed in total, then assigns the remainder to OPEC as an IEA Call on OPEC.

Until recently, the EIA used a similar approach. The approach now has been modified a bit, to include a new exogenous oil supply model, Generate World Oil Balances (GWOB). Even with the incorporation of this model, the result is very similar to IEA's Call on OPEC.

"OPEC oil production is assumed to increase throughout the reference case forecast, making OPEC the primary source for satisfying the worldwide increase in oil consumption expected over the forecast period. OPEC is assumed to be the source of additional production because its member nations hold a major portion of the world's total reserves--exceeding 902 billion barrels, over 70 percent of the world's estimated total, at the end of 2006."

The 2007 EIA Oil Reference Case Forecasts are shown in the graph above. This same data is also shown in EIA Graph of OPEC Production.

According to TheOilDrum.com, "The problem with the above assumption is that OPEC's reserves are not audited. In fact, OPEC's reserves are seriously in question." If what President Bush is saying is true -- that Saudi Arabia really can't increase production much -- President Bush's statement should start to raise questions about the reasonableness of future world oil production estimates by EIA and IEA. Without the ability to Call on OPEC, demand quickly outpaces supply. Peak oil in the next few years is likely as well, if we cannot rely on the Middle-East to ramp up production.

George Bush Is Not Alone In Mentioning Oil Supply Problems

If George Bush were the only one making statements about oil production problems, one might attribute his statement to a misunderstanding, or a slip of the tongue. We find, however, that the Wall Street Journal quoted Alan Greenspan on December 15, 2007, as saying that global oil supply peaked earlier and lower than previously contemplated. Greenspan WSJ Peak Oil Quote Jeff Rubin, chief economist of CIBC World Markets, was quoted by the Toronto Star as saying that he thinks peak oil is here. Jeff Rubin Peak Oil Quote. The Economist, in a recent edition writes that Christophe de Margerie, the boss of Total, thinks that the world's oil production may be nearing its peak. Margerie Peak Oil Quote

According to TheOilDrum.com, it almost begins to sound as if peak oil is so widely known and acknowledged that George Bush has a hard time not mentioning one of the related issues--the inability of Saudi Arabia to raise production. It is just such a normal part of conversation and thinking that it slips into a major interview on ABC's Nightline. With this background, what can one expect in the next interview?

About The Oil Drum

The Oil Drum is a web-based community that discusses all aspects of energy -- from science and technology to its societal and geopolitical impacts. The editors and readers are drawn from many disciplines in academia and industry. The Oil Drum has a staff of more than twenty including individuals from the United States, Canada, Europe, and Australia.