WrappedHersheys.com takes aim on unbirthdays, The Mad Hatter, March Hare and celebrates the madness of March with a personalized chocolate Hershey's mini-sale. 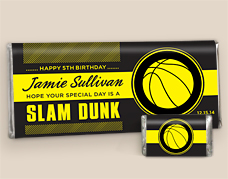 The March Hare will be much the most interesting, and perhaps as this is May it won't be raving mad -- at least not so mad as it was in March.

Wrapped Hershey's, purveyor of personalized custom candy and chocolate party favors, has declared war on Unbirthdays by introducing new birthday party theme favors to combat The March Hare and mad March Fever. According to Lewis Carroll's Alice in Wonderland, "The March Hare will be much the most interesting, and perhaps as this is May it won't be raving mad -- at least not so mad as it was in March.”

“It's dangerous to wait for May.” said Sharon Frederick, president of Wrapped Hersheys. “Our selection of themed birthday party favors is ready now and so vast that March Hare can't possibly keep pace, which of course will make him even madder!”, she continued.    “We've introduced enough new themed birthday party favors that we can easily outpace the number of available unbirthdays he can point to.” Frederick said with a confident smile. “And if that isn't enough, our mad March sale begins this March 19th and continues throughout the tournament.” The March sale offers 25 free Hershey's personalized chocolate miniatures with any order of 150 or more.

Ms. Frederick continued, “Do you realize you can't even theme an unbirthday party? Our online store, on the other hand, offers birthday party theme suggestions and ideas to suit any birthday occasion. Right now we're featuring ideas for 50th birthdays on our blog … just like Michael Jordan's. ” When asked, Frederick conceded that if a customer wanted to celebrate an unbirthday the Wrapped Hershey's customer care center and crack design team would certainly satisfy that demand.

About Wrapped Hershey's:
WrappedHersheys.com is licensed by Hershey's Chocolate and Confectionary Corporation and is the leader in the personalized candy industry. The company employs over 30 full-time and part time team members at their facility north of Cincinnati, Ohio. Wrapped Hershey's has sold over 80 million Hershey's chocolate bars and personalized candy since its founding in 1993. They offer signature personalized candy bars and favors for all occasions including birth announcements, birthday party favors, baby shower favors, as well as wedding, anniversary, religious, corporate logo promotions and personalized Hershey's holiday gift collections. WrappedHersheys.com in-house graphic design team helps customers create unique wrappers that are limited only by their own imagination.