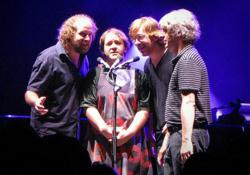 The talent of Mike, Fishman, Trey, and Page is undeniable

Phish perform live for the very first time at Darling’s Waterfront Pavilion on July 3rd. This is followed by a hectic month-long schedule that includes shows almost every other night, until their August 5th concert at the Hollywood Bowl in Los Angeles, California. Many of the venues on the itinerary have two or three shows each, so none of their fans have to feel left out.

The Phish tour 2013 this summer also features Toronto as one of the venues. This will be the band’s first performance outside the U.S. since their visit to Japan in 2000. Just like the past two years, the Phish concert dates have been planned with a big three-day closing at Dick’s Sporting Goods Park in Commerce City, Colorado from August 30th to September 1st. This Labor Day weekend farewell has become a Phish tradition for the band that enjoys playing at familiar venues.

The four band members of Phish hail from Vermont. Together, they have created a wide range of music right from 1983 till today, except for a break-up between 2004 and 2009. Their musical variety combines rock, hard rock, progressive rock, jazz, funk, bluegrass, folk, country, blues, reggae and even classical music. In particular, they are known for their improvisation and super-extended jams. This band introduced the concept of musical costumes, where they performed an entire album belonging to some other artiste during the annual Halloween Phish concerts. They were presented with the Jammys Lifetime Achievement Award in 2008, and have been touring actively since then. The Phish Tour 2012 called Bonnaroo also featured Radiohead and Red Hot Chili Peppers.

The group’s fourteenth and most recent album Joy was released in 2009. It includes hits like Time Turns Elastic, Ocelot, Number Line, and a thoughtful ballad as the title track. Many long-time fans believe that this album diverges from the youthful quirkiness that they have come to associate with Phish music. But then again, this is probably due to the fact that many of these tracks are inspired by the various reasons surrounding the group’s 2004 split.

Phish concert tickets 2013 will be available to the general public from March 29th onwards. This is one of the few American bands to be continuously on the road for so long, having toured all over the U.S. for well over two decades. Though Phish has not released any new music of late, their studio efforts have never been their main focus. This band is all about connecting with live audiences, and their on-stage performances in the past couple of years have vehemently proven that they still have what it takes to keep fans on their toes through the night. Expect nothing short of full-blown entertainment on the Phish 2013 tour.

Doremitickets.com Your #1 Source for Phish Tour 2013 Concert Tickets Dates, Money Back Guarantee. Doremitickets.com is a retail website founded in 2009. Since launching in 2009, our website has helped connect thousands of live entertainment fans to the vast network of ticket brokers that list tickets on the doremitickets® Online Exchange. These professional ticket brokers offer more than 7.5 Million event tickets on our exchange every day.