Pharos IV: Assault -- A showdown of galactic proportions. Take the controls of an advanced space fighter to defend your starbase from the relentless alien hoard. Stunning graphics and gripping gameplay await the player in this game for iPhone and iPod Touch. 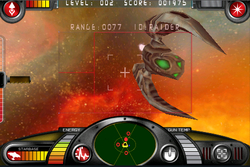 It's incredible how capable these devices are and we really took advantage of that to produce a thrilling gameplay experience.

plasq today released a new 3D video game for the iPhone and iPod Touch. Pharos IV: Assault puts players at the controls of an advanced space fighter defending the space station against an alien attack.

Pharos IV: Assault provides immersive gameplay in a spectacular universe by utilizing the accelerometers for flight control, the touch screen to launch torpedoes and missiles and incredible 3D graphics to bring it all to life. The game engine also features an advanced enemy AI to keep players on their toes and an engaging soundtrack to entertain the ears.

"This game is an homage to some of the classic 3D space shooters we've played over the years", said Robert Grant, lead developer at plasq. "It's incredible how capable these devices are and we really took advantage of that to produce a thrilling gameplay experience."

The game features classic arcade style gameplay with unlimited levels and a high-score table. Available now at the Apple iPhone App Store (itunes.com/app/pharosivassault) for a limited time at the low price $0.99 - regular price will be $1.99. A free lite version (itunes.com/app/pharosivassaultlite) is also available but limited to the first 3 levels.

About plasq:
plasq is a collaborative company with personnel scattered across 3 continents who unite online to develop innovative software for iPhone and Mac OS X including the smash hit Comic Life.