La Tortuga Hotel and Spa in Playa del Carmen, on Mexico’s Riviera Maya, received its third award of the year this month. The hotel was named ‘Mexico's Leading Boutique Hotel’ in the 2010 World Travel Awards . Earlier this year, the hotel was chosen as TripAdvisor's Traveler's Choice for 'Best Service' in January and was Expedia's ‘Travelers Select Hotel’ choice in March. 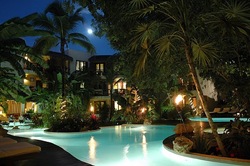 My friend has a rare talent for finding hidden hotels that are worth their weight in gold, La Tortuga Hotel was one of THE most memorable!

La Tortuga Hotel and Spa, in Playa del Carmen in the Riviera Maya in Quintana Roo, Mexico, won its third prestigious industry award of the year this month when it was named ‘Mexico’s Leading Boutique Hotel’ in the 2010 World Travel Awards. The boutique hotel was first nominated for the award in May 2010.

“The World Travel Awards has been around for 17 years and encourages world-class competition, stimulates the innovation and creativity of the company as well as ensures that a traveler receives an exceptional value," explains a hotel representative.

The awards have been described by the Wall Street Journal as the 'Oscars' of the international travel and tourism industries, unveiling who are the 'best of the best' in the region.

In January, La Tortuga was ranked in the top ten by TripAdvisor in its 2010 Travelers' Choice Awards for 'Best Service' in the Caribbean and Mexico. These choices are based on millions of unbiased reviews and opinions by vacationers on TripAdvisor.com.

The hotel received its second award in March when Expedia chose it as one of their ‘Travel Select Hotels.’

La Tortuga Hotel and Spa is well on its way towards establishing a solid position in the list of top shelf must-visit Playa del Carmen boutique hotels on the Riviera Maya.