Zoe Krasney is the winner of the fifth annual Tom Howard/John H. Reid Poetry Contest sponsored by Tom Howard Books. This contest awarded $3,670 in cash prizes for the best original poems in any style or theme. Krasney's poem "Another Country", depicting an emotionally charged visit to a loved one in prison, was judged the best of hundreds of entries from around the world. She received $1,000. The top 33 winners and runners-up are published at http://www.winningwriters.com/tompoetry 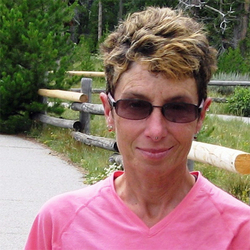 you tell me how you are learning to forgive/all the beauty that surrounds/the emptied pieces of you.

Tom Howard Books is pleased to announce the results from its fifth annual Tom Howard/John H. Reid Poetry Contest. Zoe Krasney of Albuquerque, New Mexico, won first prize and $1,000 for her poem "Another Country". Hundreds of entries were received from around the world.

Krasney's haunting poem uses symbolic and surreal imagery to express the narrator's perceptions of the prison environment where she is visiting a man she loves. The atmosphere is charged with regrets and memories that they can only speak of obliquely. Yet the possibility of redemption glimmers like the sun that suddenly breaks through the windows in the last stanza, as "you tell me how you are learning to forgive/all the beauty that surrounds/the emptied pieces of you." Contest judge John H. Reid said, "The language is not only novel but powerful in its immediacy. The poem sings in the present, yet reflects on the past with a potent streak of bitterness that runs parallel with its sorrow."

Second prize of $400 went to Paul Hamill for "A Midcentury Advent", a richly textured reminiscence of working-class families attending an evening church service in early winter. Contest judge Dee C. Konrad said, "Paul Hamill creates 'A Midcentury Advent' with a sense of 'worldly' prayer--honest and hoping for grace through human attempts to reach God. We sit with his parishioners. We note his words are committed to the expression of life experience challenged by the reality of the Mass. The last line seals the compelling exploration of the inner need to conquer the human with the divine."

Johnmichael Simon won third prize and $200 for "To Sing the World", a whimsical yet profound celebration of the diversity of human language, which also laments how our differences can divide us. Konrad said, "'To Sing the World' is a melody of words by Johnmichael Simon that highlights various languages and their special beauty as well as the language of all individuals and other creatures of the world--who speak with music, sweet and sharp."

The Tom Howard/John H. Reid Poetry Contest accepts original poems of any length, style or theme. Both published and unpublished works are accepted. The sixth annual contest opened on December 15, 2007 and will be accepting entries through the postmark deadline of September 30, 2008. The prize pool is increasing to $5,250, with a top prize of $2,000. Entries are accepted online and by mail. To see the complete guidelines and past winning entries, please go to http://www.winningwriters.com/tompoetry

Winning Writers assists with entry handling and publicity for the Tom Howard/John H. Reid Short Story Contest and other literary contests sponsored by Tom Howard Books. Winning Writers is today's leading source for poetry contest information. We have been selected as one of the "101 Best Websites for Writers" by Writer's Digest for three years in a row (2005-2007). Our online database, Poetry Contest Insider, ranks and profiles over 750 literary contests. Our free email newsletter offers news about free poetry and prose contests and quality literary resources.

Zoe Krasney of Albuquerque, NM, first prize winner of the fifth annual Tom Howard/John H. Reid Poetry ContestZoe Krasney writes, "I am an East Coast native transplanted to New Mexico 13 years ago, which feels a lot closer to heaven. Here the land itself has radiance, giving back to the sun. The desert is so alive. Right now outside the window I see a coyote, the color of winter grasses, hungrily eyeing the next-door neighbor's emus. I do landscaping for a living, and write because of love. As a single mother with a son almost out the door for college, there's a lot more room in the house for writing. I write poetry, short stories, and creative non-fiction, and am working on a screenplay about a little-known and fascinating chapter of American history."

Johnmichael Simon of Metulla, Israel, third prize winner of the fifth annual Tom Howard/John H. Reid Poetry ContestJohnmichael Simon recently published his first book of poems, largely on musical subjects, entitled "Sonatina", as well as two books in which he collaborated with his life partner, artist Helen Bar-Lev: "Cyclamens and Swords", a book of poems and illustrations about the land of Israel, and "Silly Wishes", an illustrated collection of fun poems for children of all ages.

John H. Reid, final judge of the Tom Howard/John H. Reid Poetry ContestContest sponsor and final judge John H. Reid is a former journalist and magazine editor who has published several novels, a collection of poetry, a guide to winning literary contests and fifteen books of film criticism and movie history. He lives in Wyong, Australia.