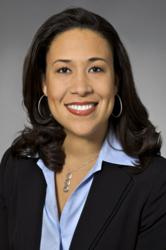 Starting a business six weeks before the economy collapsed in 2008 was less than perfect timing. I'm so honored to receive this award as proof that I survived and now thrive!

Karlyn Lothery, founder of Lothery & Associates LLC has been named 2013 RADICAL Entrepreneur, at the 5th annual Get RADICAL Conference, held at the Hyatt Regency in Reston, Virginia. Lothery, who dubs herself the “Fear Buster,” launched her company in October 2008 to help professionals of all industries to conquer their fear of public speaking and to become more confident, persuasive communicators in media interviews, presentations and other communication scenarios.

The RADICAL Entrepreneur Award is one of three prestigious honors given during the three-day women’s empowerment event presented by Best Buy and created by Doreen Rainey. The RADICAL Entrepreneur Award recognizes and honors a woman for her entrepreneurial spirit in leading, growing and successfully running her business. The RADICAL Entrepreneur Award seeks to recognize a woman who passionately pursues her business goals while also giving back to her community. The Get RADICAL Conference featured a star-studded lineup of radical women including E! News anchor, Giuliana Rancic, The Biggest Loser’s Jillian Michaels, best-selling author of No Matter What, Lisa Nichols, Judy Smith, the woman who inspired the character “Olivia Pope” on ABC television network’s Scandal, and Psych Yourself Rich author, and Today Show Contributor, Farnoosh Torabi.

Lothery, who is also a Network Journal 40 Under Forty Dynamic Business Leader (2010), Washington Business Journal’s Minority Business Leader(2011), and most recently named a Top 500 Emerging Business by DiversityBusiness.com brings more than 15 years of communication and diversity communications experience to her business. Beginning as a television news reporter and anchor, she successfully transitioned to life behind the camera assisting executives and aspiring leaders to find their voice, confidence and ability to communicate with authority. Ultimately, her clients improve their career potential in an increasingly competitive job market and work environment, through media training, presentation training and diversity training.

While running her communication consulting and training business, Lothery continues to serve on the Board of Trustees for the National Multiple Sclerosis Society, National Capital Chapter. She helps raise money through Walk MS, Bike MS, and the Making Strides Young Professionals Board to increase awareness about the disease and find a cure.

“Starting a business six weeks before the economy collapsed in 2008 was less than perfect timing. The roller coaster ride was full of its share of sweat, tears, and ultimately success. I’m so honored to receive this award as proof that I survived and now thrive,” said Lothery. “I hope other emerging entrepreneurs will trust their gut, even in the tough times, and know that hard work, a commitment to their customer, and a little faith will lead them to success!”

“Most entrepreneurs give up on their dreams before they reach the five year mark. I was scraping bottom two years in, and decided it was ‘now or never’ to turn things around. I cashed in my six figure retirement account and plunged much of it into a full business makeover, outsourced all of the operations that weren’t my forte or my interest, and focused on doing what I love. It paid off less than a year later, and resulted in 2000% revenue growth from 2008 to 2012.” Lothery adds, “The biggest lesson of all was learning that I had to be willing to take big risks to reap any reward. I’m grateful my risks paid off.”

About Lothery & Associates LLC
Since 2008, Lothery & Associates LLC has provided highly interactive and engaging workshops for professionals seeking to take their career to the next level, or simply polish their skills so their communication performance to small and large audiences and the media matches their level of knowledge and expertise of their industry. Operating with the philosophy that great communication makes the difference between where you are and where you want to be, Lothery & Associates focuses on empowering clients to get the most out of their staff, colleagues, customers, and reporters with whom they interact.