Prepper’s Playbook is the latest Special Report from Survival Life, and it’s popularity has required a waiting list for future access. 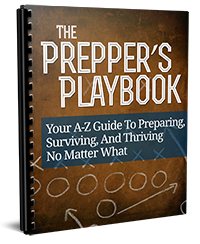 Well on its way to becoming a preeminent member of the survival blog-o-sphere, SurvivalLife.com is contributing to the conversation and hopes readers do as well.

Prepper’s Playbook has received such a positive response, that Survival Life Managing Editor ‘Above Average’ Joe has limited membership to an on-going waiting list for future access to the critical intelligence report.

“Though I truly believe Prepper's Playbook is the most comprehensive survival checklist out there, I am a firm believer that preparing cannot be put off until tomorrow,” Joe said. “That's why I've decided to shut down Prepper's Playbook for the time being as I've already kept it open too long. Chances are, if you didn't get in when you first had the opportunity, you probably wouldn't have taken action on the information contained inside.”

Joe encouragement to get off the sidelines and take responsibility for the protection of families and loved ones will hopefully persuade people to join the waiting list.

The Prepper’s Playbook is full of useful advice, and serves as a crash-course in emergency preparation. Every small step counts, as Joe likes to say, and any attempt to become more prepared will help in the long run.

Full preparation is best achieved with the help of experts, and that’s what Prepper’s Playbook offers. Joe, together with his team of survivalist experts, has produced what they believe to be an unrivaled collection of information.

Emergency kit checklists, home security, planning, and practicing suggestions are included in the Prepper’s Playbook, and all of the most vital aspects of survival are covered.

The Special Report is less than 50 pages, putting everything there is to know about preparation and survival tactics into a short, painless read. The advice is easy to follow and presents material in a way that helps both beginners and advanced preppers.

SurvivalLife.com is a non-politically biased source that is geared toward the survival side of prepping. Subscriptions to the Newsletter bring all of the latest information from SurvivalLife.com straight to readers’ inboxes.

Whether readers need wilderness survival tips or strategies to plan for an urban disaster, SurvivalLife.com covers it all. Well on its way to becoming a preeminent member of the survival blog-o-sphere, SurvivalLife.com is contributing to the conversation and hopes readers do as well.