American-Born 2014 Tundra Will Arrive This Fall at Prestige Toyota

The all-new 2014 Toyota Tundra was revealed at the 2013 Chicago Auto Show in February, where it turned the heads of many truck aficionados and received rave reviews from industry insiders. The new full-size truck, sporting a more chiseled, aggressive exterior design and an abundance of luxurious new options for the interior, is scheduled to arrive at Prestige Toyota this September. 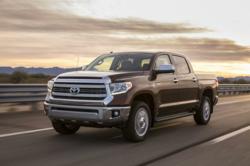 Toyota has taken "American Made" to a new level by not only producing the Tundra in the U.S., but by designing it here as well. As a Toyota dealer, we’re proud to help support American job creation in any way we can.

The “American-born” 2014 Toyota Tundra has been revealed, and it will be coming this fall to Prestige Toyota. According to Toyota and the NHTSA, no other full-size pickup on the market is more American than the Tundra, which sources 75% of its materials from North America. It is also the second Toyota model (after the 2013 Toyota Avalon) to be designed, engineered and built in the United States.

“American truck buyers are particular about their trucks, and driving a truck made in the U.S. is important to many of them,” said Steve Reedy, general sales manager at Prestige Toyota. “Toyota has taken this concept to a new level by not only producing the Tundra in the U.S., but by designing it here as well. As a Toyota dealer, we’re proud to help support American job creation in any way we can.”

The new 2014 Tundra will be available in five trim levels: SR, SR5, Limited, and two luxury grades, “Platinum” and the all-new “1794 Edition.” The 1794 Edition is named in honor of the ranch near San Antonio (founded in 1794) where the Tundra is built. The Tundra will come in three distinct cab styles: The two-door Regular Cab, the four-door Double Cab and the four-door CrewMax, all of which offer the choice of 4x2 and 4x4 drivetrains.

The 2014 Tundra range will feature several segment-leading advancements, including available Blind Spot Monitoring with Rear Cross Traffic Alert. All Tundra models will feature a standard back-up camera (viewable on the audio display), Bluetooth connectivity, and a 3.5-inch multi-information display in the gauge cluster. They will also continue to offer premium levels of power, through the available 5.7-liter DOHC i-Force V8, which produces 381 HP and 401 lb.-ft. of torque.

Low-cost Toyota incentives are currently available for award-winning 2013 Tundras, including 0% APR financing for up to 60 months. The 2013 Tundra was recently named “Best Full-Size Truck for the Money” by U.S. News and World Report. Customers interested in a new Tundra or any of the other reliable Toyota models should visit Prestige at http://prestigetoyota.com, or call 888-356-2136 to speak with a friendly customer service representative.

About Prestige Toyota
Prestige Toyota of Ramsey, New Jersey, is an authorized Toyota dealer that provides the surrounding area with quality Toyota vehicles, service, and parts. Thanks to Prestige Toyota’s friendly and knowledgeable staff, exactly 4,986 shoppers found their best deal at Prestige Toyota in 2012. Prestige Toyota is owned by Prestige, one of the largest automotive dealership entities in the United States.