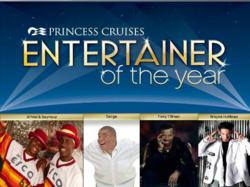 Princess Cruises has selected the four finalists who will compete in the cruise line’s second annual Entertainer of the Year competition. Chosen from the thousands of talented guest entertainers – comedians, magicians, tribute bands and other specialty acts – who grace the Princess stages each year, each of these performers will take to the stage during Princess’ upcoming Entertainer of the Year cruise.

The competition will be held aboard Crown Princess’ February 9, 2013 sailing to the Western Caribbean, where passengers will then cast their ballots to bestow the honor.

The four finalists competing to hold the title of “Entertainer of the Year” are:

Alfred and Seymour – Who says stand-up has to stand still? Cousins Alfred and Seymour combine “incredible hip-hop dancing with side-splitting comedy” for one of the most unique comedy concepts to grace the stage since Vaudeville.

Sarge – A multi-talented film, television and stage entertainer, comedian Sarge not only keeps the crowds laughing from his stand-up performance, but also sings, plays piano and does impressions as diverse as Harry Connick, Jr. and Kermit the Frog for a high-energy show.

Tony Tillman – A dynamic entertainer often compared to Sammy Davis, Jr. or Ben Vereen, Tony Tillman’s fast-paced and energetic style helped him open for Bill Cosby for more than 10 years and star in “The Rat Pack is Back” tribute show in Las Vegas.

Wayne Hoffman – Mentalist Wayne Hoffman puts on shows with high-energy displays of magic and psychological stunts. His down-to-earth and loose style combined with a highly interactive show give a fresh approach to magic and mentalism.

Passengers aboard this select sailing will be able to see live performances from each finalist as well as vote for their favorite entertainer. The winner will be announced on the final night of the cruise at a celebratory event in Princess’ signature venue, The Piazza.

“Last year passengers were wowed by the entertainment lineup on this special cruise, and they really loved picking the winner,” said Jan Swartz, Princess Cruises executive vice president. “With these dynamic finalists we anticipate another show-stopping Entertainer of the Year sailing.”

Finalists were determined by the Princess Cruises Entertainment department based on passenger surveys and onboard audience response.

The winner will receive a $5,000 cash prize and will hold the title of “2012 Princess Cruises Entertainer of the Year.”

The second annual Entertainer of the Year cruise will sail from February 9-16, 2013 cruise aboard Crown Princess. This Valentine’s Day sailing is currently available for booking with fares beginning at $669 per person, based on double occupancy.

Additional information about Princess Cruises is available through a professional travel agent, by calling 1-800-PRINCESS, or by visiting the company's website at http://www.princess.com.

About Princess Cruises:
One of the best-known names in cruising, Princess Cruises is a global cruise and tour company operating a fleet of 16 modern ships renowned for their innovative design and wide array of choices in dining, entertainment and amenities, all provided in an environment of exceptional customer service. Two ships are under construction and will join the fleet in 2013 and 2014. A recognized leader in worldwide cruising, Princess carries 1.3 million passengers each year to destinations around the globe ranging in length from three to 107 days. The company is part of Carnival Corporation & plc.

Princess Cruises is a proud member of World's Leading Cruise Lines. Our exclusive alliance also includes Carnival Cruise Lines, Holland America, Cunard Line, Costa Cruises and Seabourn. Sharing a passion to please each guest and a commitment to quality and value, World’s Leading Cruise Lines inspires people to discover their best vacation experience. Together, we offer a variety of exciting and enriching cruise vacations to the world's most desirable destinations. Visit us at http://www.worldsleadingcruiselines.com.