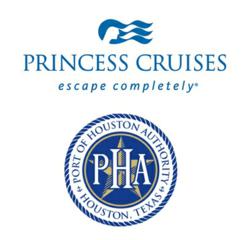 Princess Cruises will launch new service from the Port of Houston beginning in 2013 when it starts sailing from the state-of-the-art Bayport Cruise Terminal.

Princess Cruises and the Port of Houston Authority confirmed an agreement Nov. 15 for the line to make passenger cruise calls during the 2013-2014 cruise season at the port’s cruise facility.

The new service is scheduled to begin in November of 2013. A total of 26 departures are planned for the season.

The inaugural cruise is an unprecedented sailing aboard the Caribbean Princess to support U.S. veterans. The historic cruise, which will sail between Nov. 5 and Nov. 9, is expected to raise $1 million for two U.S. veterans organizations, the Vietnam Veterans Memorial Fund (VVMF) and Operation Homefront.

"We're pleased that Houston will be the home port for Caribbean Princess during her 2013-2014 season," said Jan Swartz, executive vice president. "We expect that the port's state-of-the-art facilities and convenient airport-close location will provide a great experience for our passengers embarking there."

The Port Authority’s agreement with Princess Cruises marks the first full contract with a cruise line to use the Bayport Cruise Terminal. Both Princess and the Port Authority project the cruise activity will have a significant positive impact on the economy of Harris County and the greater Houston area, including the cities of Houston and Pasadena. Smaller cities near the cruise terminal are also expected to benefit.

“We are very pleased with the decision by Princess, as it helps us fulfill our commitment to build Bayport as a means of spurring job creation and economic development for the entire Houston region,” Port Authority Chairman Jim Edmonds said.

Economic activity from a single cruise line is expected to generate $50 million annually, according to the firm Martin Associates, including local purchases of $3.6 million. Over a four-year period, this is expected to result in a $200 million dollar economic impact to the greater Houston region over the four year period.

A total of 222 jobs will be touched, including the creation of almost 100 new jobs. An estimated $941,000 annually in state and local taxes is anticipated.

When it began sailing in 2004, Caribbean Princess introduced Movies Under the Stars, a giant poolside movie theater featuring first run movies, concerts and sporting events, Onboard, passengers can also enjoy a variety of street performing acts in the Italian-inspired Piazza, indulge in a soothing massage from an outdoor cabana at The Sanctuary, or savor a premium steak cooked to order in the Crown Grill.

Princess Cruises is a global cruise and tour company taking more than 1.3 million passengers each year to more than 300 worldwide destinations on six continents. Princess currently operates a fleet of 16 ships, with two more under construction.

Princess Cruises has been named by cruise industry travel agents as having the “best cruise line itineraries.”

The Bayport Cruise Terminal, which was fully completed in 2011, is located in Pasadena, Texas, which is outside of Houston.