Doug Thompson Media Design, an emerging independent 3D visual effects, animation and creative agency for indie film and television productions, celebrates the debut of Kultur Films "The Pyramid Code" at the #3 position on Amazon's DVD best seller list. The visually stunning five-part documentary series exploring the pyramids and temples of Egypt and other locations for signs of sophisticated technology in the ancient world, has set off a global buzz with pre-release trailers generating in excess of 40,000 hits on YouTube and driving DVD pre-sales to best-seller levels. 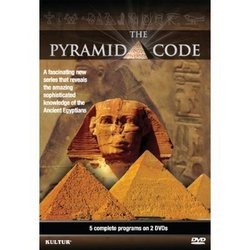 The Pyramid Code Debuts at #3 on Amazon

"The Pyramid Code", a fascinating five-part documentary series exploring the pyramids and temples of Egypt and other locations for signs of sophisticated technology in the ancient world, has set off a global buzz with pre-release trailers generating in excess of 40,000 hits on YouTube. Scheduled for DVD release on October 27, the independently produced documentary series has soared to #3 on the Amazon TV documentary charts and is currently being shopped for broadcast.

The series, based on research done by Dr. Carmen Boulter of the University of Calgary, is brought to life through the magic of digital visual effects provided by Doug Thompson Media Design. Complementing interview footage from renowned geologists, physicists, archaeologists, engineers, and authors, series art director Doug Thompson needed to visually portray facts, conjecture, and opinion using technology and his own imagination.

"We tried to visually explain as simply as possible those concepts the average viewer might not have had an introduction to before" Thompson explains. "No matter how much one may agree or disagree with the ideas proposed in this series, one cannot help but come away with the notion that current mainstream interpretations of humanity's past don't very well explain certain anomalous artifacts that exist from human prehistory. We used advanced visual effects technologies to help bridge the gap."

Thompson, who cut his teeth working with talented artists whose credits include Star Wars, Pirates of the Caribbean, CSI: Miami, Star Trek: Next Generation and Babylon 5 faced several unique challenges. The research-driven documentary lacked a script and required remote production and collaboration support. In place of a written script, he created his own visual storyboards and conceptual renderings for director Boulter's approval. The long distance process -- Dr. Boulter in Calgary, Canada, and Thompson in Oakland, CA -- required efficient communication to work through the details of the ideas that surfaced throughout the creative process.

"The Pyramid Code" is now available from Amazon.com and available for broadcast distribution from Kultur Films.