The Race Across America (http://www.raceacrossamerica.org) is certainly no cycling "tour" as an international field of competitors travel across 3,000 + miles of American real estate…non-stop! The solo male champion usually does so in less than 9 days while the top relay teams complete the human endurance feat in less than 7 days. 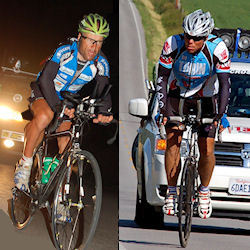 Thank you in advance for the pain to come.

On June 17, 2009, RAAM racers embark on the 28th annual journey through California, Arizona, Utah, Colorado, New Mexico, Oklahoma, Kansas, Missouri, Illinois, Indiana, Ohio, West Virginia, Pennsylvania, and finally Maryland. Among the soloists racing this year is last year's winner, Jure Robic, a special forces soldier in the Slovenian Army who will be trying to win an unprecedented 5th time. Trying to get in his way are ultra-running man and United States Navy Seal, David Goggins of San Diego, California, returning 2006 RAAM Champion, Daniel Wyss of Switzerland, and Austrian Gerhard Gulewicz, who is trying to improve on his best ever 3rd place 2007 RAAM finish.To add to the Armed Forces contingent, Canadian Air Force pilot, Tony O'Keefe will return for his second RAAM.

Unlike the Tour de France, RAAM cyclists are not allowed to draft or ride in a peloton. Also, RAAM is not broken down into stages. The official race clock starts on the shores of the Pacific Ocean and runs until the racers reach Chesapeake Bay, MD. These are some of the reasons why the Race Across America is considered the World's Toughest Bicycle Race and one of the toughest challenges on Earth. In the 2006 Mt. Everest spring climbing season, 470 people summited the fabled peak, but in 27 years of RAAM less than 200 soloists have finished the race. Austrian adventurer, Wolfgang Fasching, who summited Mt. Everest and won solo RAAM three times is often quoted as saying that he found RAAM much harder.

RAAM attracts an international field of amateur and professional racers, including doctors, lawyers, teachers, truck drivers and the neighbor next door. Among this year's hopefuls is American Charlie Engle, who ran across the Sahara Desert with Ray Zahab from Canada, and Kevin Lin of Taiwan. The trio teamed up with National Geographic, Matt Damon and Allentown Productions to film the documentary, 'Running the Sahara'. The ultra-extreme runner Engle, declared his plans to compete in the 2009 Race Across America this week. When speaking with RAAM officials, the forward thinking Engle stated, "Thank you in advance for the pain to come."

In all, there will be 25-30 soloists, who will need to pedal their bicycles approximately 22 hours a day to vie for the podium. After last year's victory, Robic's crew reported that he slept a total of 14 hours over 9 days. In spite of these obstacles, the solo average speed record, which includes time off the bike, is 15.4 mph, established in 1986 by Pete Penseyres of San Diego, CA.

Starting on June 20th, 2009, following the same course as soloists are members of RAAM's relay teams which form the bulk of RAAM competitors. In 2008, Byggkjøp / BMC Cycling Team of Norway set all team records by completing the 3,011 mile race, with an average speed of 23.24 mph, going across the entire United States on bicycles in less than 5 days and 10 hours--try driving that.

In a world of orchestrated events that attempt to manipulate the impression of something spectacular, RAAM delivers the real deal. For 28 years, RAAM has been producing champions from everyday people and the trials and tribulations they endure never fails to intrigue, motivate and inspire all those that cross their path. Regardless of whether they witness firsthand a RAAM team and it's entourage of support vehicles racing through their town or by following the progress on the race's official website, raceacrossamerica.org, RAAM creates an energy of its own.

While maintaining an extremely competitive perspective, many racers find the desire and ability to utilize RAAM as a forum to raise awareness and funds for the charities and causes they support. In each of the last three years, RAAM contestants have used the race to raise over $1 million for various charitable causes in the United States, Canada and Europe.

Also starting in Oceanside, CA on June 17, 2009, is the Race Across the West (RAW), which runs simultaneously with RAAM solo competitors until it's conclusion in Taos, NM. RAW is open to all those who feel they have the right stuff to complete the race, but they must meet cut-off times all along the course. A solo RAW rider has just 96 hours to finish the 1,044 mile long race, while a 2 or 4 person team is allotted 76 hours. Racers have signed on from the U.S.A., the United Kingdom and Spain.