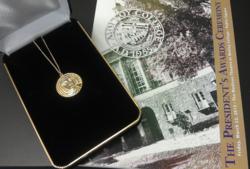 Elaine’s work at ERASE Racism as well as her many other leadership roles on boards throughout Long Island is in keeping with the College’s focus on transformation through service.

Drew Bogner, President of Molloy, presented Ms. Gross with the St. Catherine of Siena Professional Service Medal, which is awarded “to women who have made significant contributions through their professions and in public service to their communities.”

Throughout her career, Ms. Gross has focused on exploring the systemic causes of social, political, and economic inequities and finding ways to counteract those inequities. Ms. Gross has extensive experience in research, program development and evaluation at public and private agencies in Boston, as the Deputy Director of the Boston Housing Partnership and in New York as a Program Officer for the Unitarian Universalist Veatch Program at Shelter Rock. She also served as the founding Executive Director of Sustainable America, a national NGO that promoted sustainable, equitable development practices and policies. Ms. Gross was hired by the Long Island Community Foundation to launch the ERASE Racism Initiative in June 2001. In 2004, ERASE Racism became an independent New York State not-for-profit corporation.

When Vice President of Advancement at Molloy College, Edward. J. Thompson was asked why he nominated Ms. Gross for the award he explained, “Elaine’s work at ERASE Racism as well as her many other leadership roles on boards throughout Long Island is in keeping with the College’s focus on transformation through service. Elaine is a very worthy recipient of this high honor of the College.”

About ERASE Racism: ERASE Racism is a regional organization that leads public policy advocacy campaigns and related programmatic initiatives to promote racial equity in areas such as housing, public school education and healthcare. It engages in a variety of research, education and consulting activities to identify and address institutional and structural racism, primarily on Long Island.