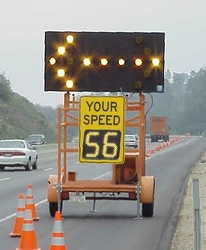 We placed the sign about 350 feet in front of the work zone and instantly noticed cars slowing down as they approached. The crew that I had out there said the difference these signs made was absolutely unbelievable. I know our traditional warning signs wouldn't have had nearly the same effect.

New sales analysis from Information Display Company (IDC) shows radar speed signs are becoming a standard safety device for a growing number of traffic maintenance crews, construction workers, public works professionals, and others that work in and around traffic. Used in conjunction with other road safety equipment such as electronic arrow boards and barrier systems, the radar speed signs are proving to be highly effective at slowing cars and increasing the safety of both drivers and workers.

According to the Transportation Research Board nearly 1,100 die and 50,000 are injured each year as a result of motor vehicle crashes in work zones nationwide. A large portion of these crashes involves drivers that are exceeding the posted speed limit. IDC data indicates that, in a growing number of cases, road crews are now using radar speed signs to address this safety concern.

"We first used a portable radar speed sign while doing storm drain repair at a Y intersection of a four lane thoroughfare," said Tad Blanton, public works field operations supervisor in Medford, Oregon. "We placed the sign about 350 feet in front of the work zone and instantly noticed cars slowing down as they approached. The crew that I had out there said the difference these signs made was absolutely unbelievable. I know our traditional warning signs wouldn't have had nearly the same effect."

A number of government studies support the mounting anecdotal evidence being reported by roadwork crews across the country. In a 2008 study conducted by the Texas Transportation Institute, the effectiveness of five different traffic control devices was evaluated in a short-term maintenance work zone setting. Of the five devices - including a trailer-mounted radar speed sign, radar drones, portable rumble strips, alternative worker vests and fluorescent roll-up signs - the radar speed signs produced the largest reduction in work zone traffic speeds of all the devices.

"With the aging of our nation's roads and bridges and new federal programs aimed at infrastructure improvements, we are seeing a dramatic increase in work zone activities," said Gary ODell, president of Information Display Company (IDC), the largest producer of radar speed signs. "IDC is helping agencies such as Medford's public works department justify the use of radar speed signs through a "rent before you buy" program that allows them to witness the effectiveness of these devices before they commit to a purchase."

"We often use them together with arrow boards mounted on the back of one of our trucks," said Marvin Sohlo, work zone standards engineer for Mn/DOT. "We found that the displays were causing drivers to put the brakes on and dropping average speeds by 8 to 10 miles per hour. Their proven effectiveness is quickly making them a standard device for our crews."