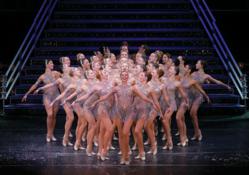 The World-Famous Rockettes in their "Shine" Scene

In this year’s production, the ‘Christmas Dreams’ scene will allow audiences to experience exciting technological enhancements and stunning performance elements alongside the beloved numbers that have become a holiday tradition in Nashville.

MSG Entertainment (MSGE) announces the return in 2012 of the Radio City Christmas Spectacular, starring the Rockettes, to Nashville with the beloved production, Christmas Dreams. America’s #1 holiday show, celebrating its return to Nashville as part of Gaylord Opryland Resort’s 29th annual A Country Christmas, will transport audiences of all ages on an unforgettable holiday journey with a new 3D movie as Santa and his reindeer embark on a thrilling sleigh ride through the Big Apple. This year’s Christmas Spectacular will also feature dynamic Rockettes’ performances and a memorable Rockettes’ finale, “Christmas Dreams,” that will make Christmas more magical than ever before. The Christmas Spectacular will run at the Grand Ole Opry House from November 16 – December 24, 2012. Tickets are on sale now.

“We are thrilled to return to Nashville at the Grand Ole Opry House with the new Radio City Christmas Spectacular,” said Don Simpson, executive vice president of productions, MSG Entertainment. “In this year’s production, the ‘Christmas Dreams’ scene will allow audiences to experience exciting technological enhancements and stunning performance elements alongside the beloved numbers that have become a holiday tradition in Nashville. Returning fans reliving the ‘Christmas Dreams’ will be amazed by the 2012 edition of the Christmas Spectacular, and new audience members will not want to miss this show.”

This year, Nashville audiences will be completely enveloped in the Christmas spirit with a new 3D movie scene, as Santa Claus and his reindeer take audiences on a magical journey experiencing the sights and sounds of New York City. Audiences will be a part of the ride of a lifetime seen through 3D glasses as Santa flies by Washington Square Park, speeds past the Empire State Building, coasts through Central Park and dashes by the holiday-clad windows of Fifth Avenue in his quest for a gift for Mrs. Claus. The technological enhancements coupled with the incredible imagery of New York at Christmas will create an unforgettable experience as the magic of the holidays is brought to the iconic Grand Ole Opry House in this exciting film.

This year, the Radio City Christmas Spectacular celebrates 85 magical years of the Rockettes, commemorating their past, present and future in this unprecedented milestone year. The Rockettes have remained a timeless tradition as American icons throughout their 85 year legacy. They continue to take the Christmas Spectacular to new heights, dazzling audiences with their performance style as it continues to be both deceivingly complex and entirely glamorous.

The stage will come alive with scenes including “Sleigh Ride,” where the Rockettes will become Santa’s reindeer, helping both Santa and the audience begin their magical journey, and “Christmas Dreams,” which will showcase the Rockettes’ unparalleled precision technique. Fan favorite “Holiday Spirit” will transport audiences on a thrilling journey straight to Santa’s Workshop in the North Pole without ever having to leave their seats.

The Rockettes will bring audiences to their feet with the show-stopping numbers “The 12 Days of Christmas,” an energetic tap-infused routine, and “Christmas in New York,” as the Rockettes showcase their signature eye-high kicks and immerse audiences in the buzzing scenes and sounds of New York City.

Beloved numbers such as “Parade of the Wooden Soldiers,” which continues to set the standard as the signature Rockettes’ number for precision performance, and “The Living Nativity,” both of which have been performed since the Christmas Spectacular’s inception, still remain a vital part of the show’s core. Audiences will have the opportunity to lend their voices in the closing number, the “Hallelujah Chorus,” a fan favorite and tradition in the Nashville production.

About A Country Christmas at Gaylord Opryland Resort
Gaylord Opryland Resort's 29th annual A Country Christmas will make memories of a lifetime for the thousands of people who travel from around the world to experience the most captivating holiday resort entertainment, décor and food in America. A Country Christmas® includes more than 2 million lights and more than a dozen shows and attractions, including an interactive, bigger-than-life ice sculpture world, ICE!™ featuring DreamWorks' Merry Madagascar™; the Radio City Christmas Spectacular starring the Rockettes®; Lorrie Morgan’s Enchanted Christmas Dinner & Show™; and much more. Located in Nashville, Tenn., the newly-renovated resort and flagship property of Gaylord Hotels features 2,881 rooms and nine acres of lavish indoor gardens and waterfalls under signature glass atriums. Learn more at http://www.ChristmasAtGaylordOpryland.com.

The World-Famous Rockettes in their "Shine" Scene