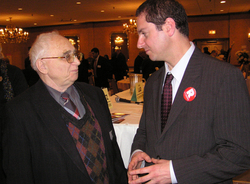 Rather than tackle the dire problem of Social Security shortfalls honestly and openly, the SSA has made an arbitrary decision to tap the underrepresented

Polish and other immigrant communities are particularly concerned with the SSA’s new interpretation of WEP that affects low-income retirees based on complex intergovernmental agreements between the United States and their home countries. Revised formulas dictate a monthly retroactive benefit reduction of a minimum of 40 percent, with a cap at $380.

“Rather than tackle the dire problem of Social Security shortfalls honestly and openly, the SSA has made an arbitrary decision to tap the underrepresented," Ratowitz told the crowd. “Bad policy cannot be solved by cheating. I will be your champion in Congress on this issue.”

The Social Security Administration’s WEP effectively limits payouts, primarily affecting beneficiaries who have earned a pension in any job that did not take Social Security taxes and also have worked in other jobs long enough to qualify for a Social Security retirement or disability benefit. Legislation under consideration in Congress would repeal WEP, as well as government pension offset requirements. Bipartisan H.R.235 Social Security Fairness Act of 2009 has been referred to the House Ways and Means Committee. The bill has amassed 314 co-sponsors.

“We know via the Congressional Budget Office and by examining many other indicators that Social Security is unsustainable,” Ratowitz explains. “Social Security payments begin exceeding revenues in 2016, and the program will be bankrupt in 2036. We can no longer afford to delude ourselves into believing that we are shoring up a trust fund.

“We absolutely must fulfill our obligations to today’s retirees, but immediately enact system-wide reforms and explore free-market alternatives, like individual IRAs, to a program that was destined to fail," Ratowitz continues, "WEP is an unjust shortcut and an unacceptable response to a system breakdown.”