Ticks can pose a serious threat to dogs and their owners. Fresh Patch, the maker of a new indoor dog potty, is recommending that dog owners follow some simple steps this upcoming tick season. 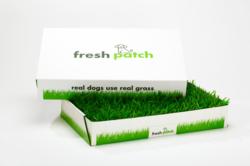 The result of tick bites can be Lyme disease and other serious illnesses in both dogs and humans.

Early April will mark the beginning of the annual tick season that will last through the end of Fall in most American states that have seasonal changes. In states with year-round warm weather, ticks will remain a constant threat. Fresh Patch--the maker of the real-grass, fully-disposable dog potty--can help reduce the dangers of ticks picked up by dogs, who can then transfer them to humans. Because Fresh Patch lets dogs meet their bathroom needs inside the home, it reduces their exposure to high grass, dry leaves, gardens, and other outside areas where ticks thrive.

According to the U.S. Centers for Disease Control and Prevention (CDC), dogs are very susceptible to tick bites and tick-borne diseases (http://www.cdc.gov/lyme/prev/on_pets.html). If dog owners share beds and couches with their pets, they may increase the risk of tick transfer and subsequent disease.

The CDC notes that the result of tick bites can be Lyme disease and other serious illnesses in both dogs and humans. For people, typical symptoms include fever, headache, fatigue, and a characteristic skin rash. If left untreated, infection can spread to joints, the heart, and the nervous system. In 2010, 22,500 confirmed and 7,500 probable cases of Lyme disease were reported to the CDC (http://www.cdc.gov/niosh/topics/lyme/).

In April 2012, a Tick-Borne Disease Alliance was formed to raise awareness, promote advocacy and support initiatives to find a cure for tick-borne diseases, including Lyme disease. Fresh Patch is proud to offer an alternative to dog owners who want to avoid or minimize walking their dogs during the height of tick season.