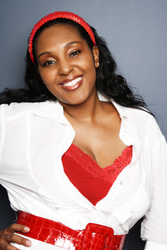 Television talk show hostess Kietta Mayweather Gamble exposes the inside story on subjects, often, "Contrary to how you believe things may be”. "Real Talk with Kietta" will tell you how things really are!” Hollywood’s ExtraExtra! Magazine covered Real Talk with Kietta, extolling her coverage of “…such hot-button topics as AIDS, drug abuse, incest and poverty.” “Real Talk with Kietta”, also received rave reviews from audience members of The Tonight Show with Jay Leno show, during a “Sold/Not Sold” segment. Hundreds of submissions were considered however, Real Talk with Kietta was one of only three entries receiving the coveted “Sold” mark, based on show quality and their respective host’s abilities. Variety Magazine also covered the show during the 2006 NAPTE convention.

A new media darling has been created! Kietta Mayweather Gamble! This intelligent, caring and humble classic beauty delivers what she promises, Real Talk, Real People, and Real Solutions. Uniquely qualified among her peers to present the topics covered by Real Talk with Kietta, she represents her guests and their issues in a clear concise manner with a personality both endearing and motivating.