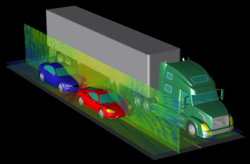 Extending our GPU capabilities to leverage additional cards through clustering creates a solution with limitless potential. Remcom is excited to lead the way with a new technology that will have a significant impact in solving many modern EM problems.

Rodney Korte, product manager for XFdtd, said, “Remcom led the way in bringing GPU acceleration technology to the EM simulation market, and that has become a cornerstone of XF7’s arsenal of time-saving features. Our speed enables users to simulate increasingly complex scenarios in a reasonable timeframe. Now, a growing number of customers have exhausted the amount of GPU RAM available for use in a single machine but still wish to grow the complexity of their models. Extending our GPU capabilities to leverage additional cards through clustering creates a solution with limitless potential. The capability is universally useful for all of our customers; even with more modest memory requirements, MPI + GPU can dramatically cut your simulation times by orders of magnitude.”

Simulation improves product safety and performance in a variety of applications; however, the memory constraints for vast problem spaces and the enormous computation times on CPU-based platforms have made simulation of certain applications impractical until now. This advance promises to bring the benefit of simulation to new arenas.

For example, simulating WiFi performance inside the passenger compartment of an aircraft was complicated by the large size of the cabin and the high frequencies involved. Using XF7’s new MPI + GPU feature, Remcom performed this experiment, with and without human passengers, on 24 NVIDIA M2090 GPUs installed in the NVIDIA PSG Cluster. The cluster, provided courtesy of NVIDIA Corporation, completed this 94 GB simulation (2.84 billion cells) in less than 1.75 hours.

Inter-vehicle communication (IVC) systems serve as another example of applying simulation to previously intractable problems. IVC offers the possibility of useful features such as dynamic cruise control, collision avoidance and real-time traffic management; however, simulating these products under realistic operating conditions has been challenging. Remcom prepared an example of an IVC working in a highway scenario. A monopole mounted on the front bumper of a sedan served as the transmitter in the presence of a second passenger car and a semi-truck. The problem required 3.7 billion cells, 118 GB of GPU RAM and completed in just 22 minutes on the NVIDIA PSG Cluster.

The details of both examples can be found at: http://www.remcom.com/no-limits.

“Remcom is excited to lead the way with a new technology that will have a significant impact in solving many modern electromagnetic problems,” Korte said. “This is a real game changer for those working on critical communications, defense, and transportation technologies, to name a few.”

The latest release of XF7 also includes External Queue Integration (EQI) for those users where one or more high-performance computing (HPC) systems are used. In these environments, desktop workstations are used to prepare projects, create simulations, and view results, but the simulations are performed on an HPC system. EQI allows users to queue simulations directly with such systems instead of manually submitting them for execution or queuing them locally.

Other new features include STL and DXF export of geometry, bend solid geometry and project a sheet, crop ODB++, and simulation creation optimization. Details on the new release can be found at http://www.remcom.com/xf7-latest-enhancements.

NVIDIA and CUDA are trademarks and/or registered trademarks of NVIDIA Corporation in the United States and other countries.