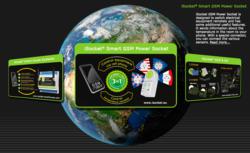 In line with their objective "iSocket in every home" Intellectronics today announced the launch of the project "The World of iSocket" which combines the group of devices for remote GSM control and smart home systems.

A unique project for smart home remote monitoring has risen on the technological horizon – iSocket®. The first iSocket device – Smart GSM Power Socket – was launched by Intellectronics, Finland in 2011 and since then the project has grown rapidly.

The "World of iSocket" now has an additional three new main categories over and above their iSocket Smart GSM Power Socket:

These four categories are all combined on the new website http://www.isocketworld.com where the company has begun to actively promote their concept "iSocket in every home".

Intellectronics are confident that their new project will prove to be a huge success. They claim that iSocket offers state-of-the art devices for remote monitoring. These can be used to create a home alarm system, GSM remote control of electrical appliances as well as remote control of temperature. The range offers devices not only for end users, but also for professional integrators and manufacturers who can create their own systems using iSocket GSM modems. The company also markets power solutions for GSM modules.

The latest model from iSocket – the iSocket GSM 707 - was recently unveiled by Intellectronics, Finland. Two important new features are offered on this model.

iSocket® Power Notifier – This feature will notify the user in the event of a power failure or when the power is restored. Just set up the mobile number to be notified. Once this number is configured you will receive messages to that number whenever power is interrupted and/or restored.

iSocket® Temperature Notifier – This will alert the user if the room temperature falls or rises beyond critical levels. This smart feature of iSocket is easy to use. Just set up one or two thresholds and you will be informed when deviations occur (e.g. the temperature in a greenhouse falls- or the temperature in a warehouse rises above- acceptable values).