RepealAUMF.org calls on American grandparents to join #AumfHungerStrike, a nationwide hunger strike to last until AUMF 2001, the post-9/11 Authorization for Use of Military Force, is repealed. 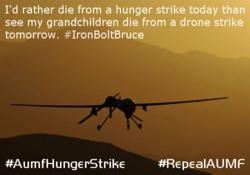 I'd rather die from a hunger strike today than see my grandchildren die from a drone strike tomorrow. - IronBoltBruce

At 6:00am ET on 27 March 2013 world record holding long distance motorcycle rider and lifelong civil liberties activist 'Ironbolt Bruce' Arnold began a fast that will not end - in his words - "...until AUMF 2001 is gone or I am."

Through his Twitter account @RepealAUMF2001, #IronBoltBruce is asking other American grandparents concerned about the future and freedom of their grandchildren to join his hunger strike demanding passage of "H.R. 198: Repeal of the Authorization for Use of Military Force" which will (a) repeal AUMF 2001 (Public Law 107-40), and thereby (b) end the 11+ year global "War on Terrorism" (#GWOT) that has resulted in the deaths by drone strikes and other means of hundreds of thousands of innocent civilians including children in a growing list of countries (at least 15 to 20 as far back as this 10 Nov 2008 report by the New York Times, as well as (c) remove the legal justification for Section 1021 of the National Defense Authorization Act for Fiscal Year 2012 (Public Law 112-81) - also known as the "Homeland Battlefield" or #IndefiniteDetention provisions of NDAA 2012 - under which the federal government can use military force to detain and hold indefinitely without charge or trial American citizens on American soil (see NDAA 2012 Subtitle D Counterterrorism Section 1021).

"There may always be questions and debate about who really did what on 11 September 2001 and why," Arnold stated, "but there can be no debate about our nation's accelerating descent from freedom to fascism - from democracy to despotism - since that 'catastrophic and catalyzing event' [bit.ly/WGFJG]. Fearing enemies real or contrived, from 9/11 forward the American people have allowed life and liberty to be legislated away in exchange for so-called security. NDAA 2012 gives our government the right to detain us without charge, and under AUMF 2001 an Imperial Presidency that arose under George W. Bush to be expanded by Barack Obama now claims the power to kill us - by drones or otherwise - without due process of law. I want my grandchildren to grow up in the Land of the Free and the Home of the Brave. But so long as AUMF 2001 is law, America is neither. I intend to change that or die trying."

Congresswoman Barbara Lee (D-CA) was the only member of Congress to vote against AUMF in 2001 and recently sponsored H.R.198 to repeal it:

Congressman Walter Jones (R-NC) and other representatives have signed on as co-sponsors, but barring a groundswell of bipartisan support GovTrack.US gives #HR198 a "2% chance of getting past committee" and a "0% chance of being enacted." According to Ironbolt Bruce, "such a groundswell would fly in the face of Military Industrial Complex and Top Secret America corporate interests who stand to lose trillions in revenues if AUMF 2001 is repealed and will gladly pour billions into anonymous political action committees, campaign contributions and lobbying to maintain the status quo." [See OpenSecrets.org | InfluenceExplorer.com | TopSecretAmerica.com] He believes, consequently, that the only way to motivate both Democrats and Republicans in the House and Senate to repeal AUMF 2001 is to mount a united nonpartisan grassroots effort to make the politicians of both parties fear the loss of votes from their constituents more so than the loss of cash from their corporate benefactors. He hopes - and may be betting his life - that his nationwide #AumfHungerStrike will serve as the "catalyzing event" for that campaign.

Grandparents and others with the courage and conviction to participate in the AUMF hunger strike are urged by RepealAUMF.org to (a) commence their fast as soon as possible, (b) email their commitment and status to RepealAUMF@riseup.net, and most importantly (c) make sure that their U.S. Senators, U.S. Representative, the local and national media, and all of their friends, followers and contacts know what they are doing and why. For updates and more information logon to RepealAUMF.org, follow @RepealAUMF2001, and follow Twitter hashtags #AumfHungerStrike #AUMF #HR198 #NDAA and #RepealAUMF. Web-savvy volunteers willing to maintain or build new RepealAUMF[.org | .com | .net | .biz | .info] websites and resources now or if #IronBoltBruce becomes incapacitated should send email with credentials to RepealAUMF@riseup.net. Donations for medical and operating expenses can be made here: