Is 2013 "The Year" for Tim Larkin and His Target Focus Training System? Reviews-Domain.com Uncovers this Self Defense Program in Detail in its New Review

Faced with abrupt crisis from physical threat, a person will either be a helpless victim or a dangerous human weapon. Tim Larkin of Target Focus Training continues to prepare human weapons, and Reviews-Domain.com Releases a Review of Larkin's system and a preview into 2013. 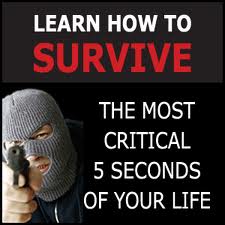 If you’re worried about getting hurt, you’ll hesitate and go defensive, making that outcome more likely.

Just earlier this month the Larkin team launched its 2013 Blog activity. Here's a sample:
"If you’re worried about getting hurt, you’ll hesitate and go defensive, making that outcome more likely. If you worry about what he’s doing, you’ll get to find out just what that is while he’s doing it. If you focus on what you’re doing to him, then that’s where you’ll put all your effort—into a target to cause injury."

With an active Blog, TFT in 2013 looks to convey a steady stream of logic as it applies to real life danger scenarios. Much of it has to do with the psychology of "self" defense, and methods of training and preparation that account for innate human actions and reactions.

States Larkin, "It doesn’t matter how active, athletic, coordinated or healthy you are…whether a shredded MMA fighter, couch potato, a stay-at-home mom, even a grandmother... all can quickly learn to neutralize even multiple armed attackers! The fact is… anyone can learn how to use lethal force."

Philosophically speaking, perhaps this Larkin quote best sums up his approach: "causing injury to the other guy is the only thing that allows you to walk away... alive." He provides video and other real-life instances which corroborate this claim.

Larkin argues that we live in a very dangerous time, and often cannot rely on the availability of guns and knives for protection of self and family, citing several viable instances where this reality rings menacingly true. He laments that the majority of people who hear about his Target Focus Training system are either "too busy" to listen, or quickly conclude that, "it will never happen to me."

Says John Taggart, chief editor at reviews-domain.com, "We certainly don't live in the days of our parents or grandparents, and with a societal trend toward morbid curiosity, mindless violence, kidnappings, bullying, and all other manner of irreputable social interaction, perhaps more people should take a listen to Larkin and get prepared."

"In the same way that a person buys insurance in the case of an auto accident or house fire," says Larkin "Why is it not considered imperative to insure oneself with knowledge of self-protection using our natural tools?"

Continues Larkin, "Chaos in violence is a given. It comes on as a bewildering mess… and doesn’t change until someone does something specific to change it. The sword that cleaves that Gordian Knot is debilitating injury, where you take away his ability to think and move, or both. The first one to get it done—and knows what to do with it—wins. Not the first to move, or the first to strike… but the first to injure."

In other words, "The guy attacking you wishes great harm to you, so you best know how to force him into inaction for your own protection and those under your care."

Click here for free training videos which Tim Larkin is giving away right now, or here for the review, or here for his popular Human Weapon series.

This reviews-domain.com review is for people who are serious about being prepared in real-life danger situations. If you are simply looking to be the next MMA groupie to buy some gloves and a bag, keep browsing. Author, editor, and well-protected person John Taggart is dead serious about defining the difference between fighting for sport and fighting for safety, or perhaps your life. Thus, John’s focus on Target Focus Training is purposeful, highlighted as a program that has philosophy and system unabashedly in favor of brutality-by-necessity.