Richard Elliot-Square announces release of ‘Supping with the Devil’ 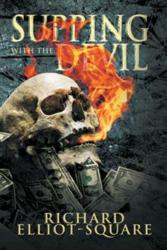 Elliot-Square hopes that his book, which is partially based on his own life, will leave “a sense of loathing for those that exploit the vulnerable.”

In “Supping with the Devil” (published by AuthorHouse), author Richard Elliot-Square’s new thrilling action-packed novel, readers join Nick Adams as he reluctantly falls into the dangerous world of the rich and powerful.

Despite his initial refusal to cooperate with the United States government, newly successful entrepreneur Nick Adams finds himself becoming an essential part of an agency formed to entrap two of the world’s richest and most powerful mega tycoons.

Nick is caught up in a spiral of murder, conspiracy, political corruption, sexual abuse and blackmail. As he battles his way through the unscrupulous serpent’s nest that he unwittingly fell into, his life becomes more complicated when careless pillow talk brings unwanted attention from dark forces. These new players will stop at nothing to highjack the meticulously planned financial double cross that the government has staged.

An excerpt from “Supping with the Devil”:

“Somewhere in the distance, he heard a mule bray, a dog bark, and a distant long roll of thunder. From the grape-decked terrace high above them stood Don Franco, watching the couple on their approach. The mirrored lenses of his sunglasses reflected the sky as he observed the searing Italian sun disappear behind an ominously dark cloud. A storm was on its way.”

Elliot-Square hopes that his book, which is partially based on his own life, will leave “a sense of loathing for those that exploit the vulnerable.” He also wants readers to feel the excitement of a thriller and know that the story will continue as a sequel.

About the Author
Richard Elliot-Square is married and based in London. As a former military officer, he is now an entrepreneur and a director of several companies which has him traveling extensively. During the course of his career, he has been involved in many international ventures, which has allowed him to meet many extraordinary people including billionaires, politicians, bankers, leaders of industry and the inspirational, as well as con-men, flakes and crooks.

AuthorHouse, an Author Solutions, Inc. self-publishing imprint, is a leading provider of book publishing, marketing, and bookselling services for authors around the globe and offers the industry’s only suite of Hollywood book-to-film services. Committed to providing the highest level of customer service, AuthorHouse assigns each author personal publishing and marketing consultants who provide guidance throughout the process. Headquartered in Bloomington, Indiana, AuthorHouse celebrated 15 years of service to authors in Sept. 2011.For more information or to publish a book visit authorhouse.com or call 0800 1974150. For the latest, follow @AuthorHouseUK on Twitter.
###