Compelling book puts an end to the misrepresentations of science and religion. 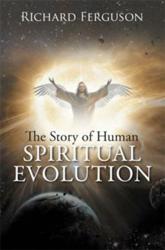 The epic contrast between science and religion has indeed caused a stir in many discussions and intellectual debates throughout time. It is not a secret that certain explanations that scientists have presented over the years, do go in contrast against theological beliefs, and vice versa. These extremes have baffled millions of people as they try to believe in one but are swayed by the other at some point in their lives. What many do not realize is that religion and science are actually two sides of the same coin and that science and spirit can indeed be incorporated as one. Author Richard Ferguson offers his expertise and insights about the connection between God and the physical realm in his book “The Story of Human Spiritual Evolution”.

A new holistic and open understanding, this book illustrates that science is the study of God’s creation, which continues to be a work in progress. According to Ferguson, the universe is not a static object but a continuously developing realm which God looks over. From the onset of the Big Bang theory, God began of the creation of science. Hence, in many ways, God and his creation have become inseparable entities. Science and spirit are one and the same.

This book traces the history of human awareness of God and belief back to its earliest roots. It shows how the foundation for belief in God was contained within the instant of creation itself. It shows that as the universe developed, there came a point in human evolution where humans had the capability to become enlightened.

Written with easy-to-understand texts, and eye-opening presentation of reliable references, “The Story of Human Spiritual Evolution” delves deep into the process of creation in which science is the framework, and God is the sole creator. A groundbreaking literary masterpiece, this book provides an exemplary description of the workings of both the worldly and spiritual dimensions, thus putting an end to the conflicting misconceptions of religion and science.

About the Author
Richard Ferguson has been called a modern renaissance man. He holds a degree in chemistry, a minor in philosophy, a Master’s degree in business, a master’s degree in pastoral ministry majoring in spirituality. He is also holds a commercial pilot’s license with flight instructor ratings. He is already a published spiritual author having written A Real Life Christian Spiritual Journey. He is also a Reiki Master and has been a spiritual seeker ever since a divine being unexpectedly appeared to him while riding in a commercial airliner high above the Pacific Ocean. It was an event that changed the direction of his life.