Maize states: "My opinion for 2011 is that interest rates will increase from its current very low numbers. This factor is a negative for the industry. If we are keeping score we are 0 for 1 as to a positive for 2011 real estate market." 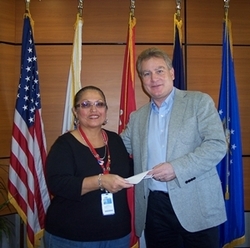 Richard Maize: Donating to USO Provides Security To US

The negatives (obviously, this is so simplicit to all the factors that are involved in the price and market improvement) are the upcoming increase in the interest rates and the economy in a whole. The positives are consumer confidence and the prices.

Richard Maize, one of America's most respected businessmen and philanthropists, responds to current indicators for the US real estate market for 2011.

"This is a difficult topic to discuss because of the vast variety of types of real estate in the United States i.e. - commercial, residential, industrial - and different areas that are greatly impacted with other parts of the country less affected . A simple answer is too general. I will discuss this in general terms and some of my thoughts as to the direction of the overall real estate marketplace," says Richard Maize.

"Here are a few simplicit factors that have an affect in the US real estate market: interest rates - the lower the rate, the more affordable your real estate is to the buyer (or holder) of property. More than any other asset, real estate ownership will almost always carry a mortgage."

Richard Maize continues: "Lower interest rates also generate money by means of refinancing (both by cash out and lowering payments allowing for more spendable each month because of the lower payments) that activates employment by the banks and lenders and all the acceleratory jobs such as escrow, title, appraisers, etc."

"While looking at the commercial market, the lower the rates the greater the cash flow or net spendable," says Richard Maize. "In the residential marketplace, the lower the rate, the more you can borrow with the same income stream opposed to a less amount at a greater interest rate. After an extended time with these lower rates and the confidence level increases, the lower rate will also increase demand/value of the properties. Interest rates are strongly affected by the fear of inflation. The higher interest rates fight inflation."

Richard Maize states: "My opinion for 2011 is that interest rates will raise from its current very low figures. This factor is a negative for the industry. If we are keeping score we are 0 for 1 as to a positive for 2011 US real estate market."

"The economy - the economy both national and international has a major impact on the real estate market. From the lowest economic level buyers to the most wealthy. The low end we are dealing with basic employment (at an almost all time high unemployment rate in some areas). Without gainfully employed, cannot be in the market for a house (at least unlikely)," says Maize.

"The other issue for those who had a hard time in their own financial crisis, their credit profile is damaged and will take a number of years to repair itself. What that may equate to is no finance on new cars or new home loans. This could help lead to a stalling economic recovery when the other fundamentals have improved," says Richard Maize.

"Even those that are employed, they could be overqualified for their position for a salary far less than their value because their profession is not hiring or surviving this recession."

"Low wages is another factor - no buyers for a new home," says Richard Maize. "The higher net worth individuals have also reduced their spending limits for a home which will limit the higher end homes sales. Basic economic equation is supply and demand. Limited demand brings prices down - economy is a negative for real estate sales. There are no real signs in the general economic sectors of a big turn in retail sales or other major economic indices for 2011. We are now 0 for 2."

"Consumer confidence. We have something here that could be a glimmer of hope. In many of the cities of the United States, most real estate owners remember other real estate slow downs and are waiting for the recovery (although in my opinion there are other factors that could cause these optimistic folks a long wait for the pot of gold) and don’t want to miss the lower priced real estate. Now 1 for 3," says Richard Maize.

"Prices - well we have another winner here. The prices have deteriorated enough for some demand either by eager sellers or REOs (property owned by banks and lenders) at reduced prices - even lower than the “now” market price. We are now at 2 for 4."

"I expect to see homes prices continuing to fall this year, if a forecast made by Clear Capital is correct," says Richard Maize.

Maize states that national home prices may experience a 3.7 percent year-over-year drop this year, according to the company’s 2010 home data index market report — an analysis of the top 50 metro areas. While not as severe as the 4.1 percent year-over-year decline recorded in 2010, price declines are expected to continue as unemployment and real estate owned property levels remain high.

"Housing prices will continue to fall but with more consistency than last year. In 2010, federal incentives offered to home buyers threw the housing market into a tailspin, creating periods of extremes in activity. In 2011, ebb and flow of home prices should be more gradual," says Richard Maize.

Maize says that the National Association of Home Builders, the American Home Furnishings Alliance and the International Housewares Association have observed as a new frugality among buyers. It applies to everything from house size, to the cost of furnishings and the features of home appliances. The same consumer caution that brought us the “staycations’ of the previous decade will continue to drive many of 2011’s home-related trends.

“People are still spending, says Richard Maize, “but they are limiting what they are spending on.” In many cases the spending will be on improvements to make home more comfortable, he said. Others will spend only as needed. If an essential appliance breaks, for example, the replacement will likely need to be a high-performer, with greater value in terms of both pricing and function, Maize said. “It’s got to be more for your money.”

"So, lets summarize," adds Maize. "The negatives (obviously, this is so simplicit to all the factors that are involved in the price and market improvement) are the upcoming increase in the interest rates and the economy in a whole. The positives are consumer confidence and the prices. I think the first two negatives outweigh the positives and we have a flat outcome in the upcoming year for real estate."

Richard Maize concludes: "That is also my opinion regarding the commercial real estate world but there are definite buys out there that make sense in today’s climate. One good word about real estate trends for 2011 is that green homes will become increasingly affordable, smart and energy efficient. That we are witnessing a true increase and expansion in eco-friendly homes and this is a step in the right direction for all."

The Rochelle and Richard Maize Foundation is a philanthropic organization that supports and contributes volunteer and financial resources to causes locally in the community and worldwide by supporting meaningful programs focusing on art, culture, family services and health care that work to help people live more fulfilling lives.

Richard Maize and his wife, Rochelle Maize, are longtime benefactors of many other non-profit organizations and Richard Maize has been recognized for his efforts on behalf of more than a dozen charitable groups and community projects.

The Rochelle and Richard Maize Foundation supports an extraordinary number of foundations, organizations, and non-profit groups.