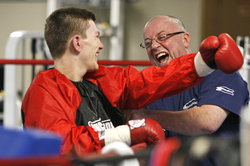 For years boxers have cut down on food and water to reach target weights. That's completely the wrong attitude

The CNP Professional range of protein supplements will be playing a key role in the upcoming bout between England's most famous boxer, [Ricky Hatton and Mexican-American scrapper Juan Lazcano at Manchester's City Stadium on May 24th.

Decades of nutrition research will be demonstrated as 'The Hitman' Hatton battles it out with 'The Hispanic Causing Panic'. The CNP nutrition program upturns many conventional ideas about what a boxer should be eating and drinking during training. And no one will be watching harder than sports nutritionist guru Kerry Kayes, founder of the CNP Professional range and advisor to the Team Hatton camp.

Kerry Kayes, who studied nutrition when he himself was a champion bodybuilder in the 1970s and 80s, took the younger Ricky under his wing six years ago. At the time the boxer was already gaining a name as much for his 'relaxation' with his mates and his traditional English breakfasts as for his world-class boxing.

So when Ricky returned to the gym in February after his world title fight last December and an uproarious Christmas and New Year, his nutrition program was really under test. But his phenomenal self-discipline in training amazes the sports world, and it seems that no one has the ability to train harder and come out fighting more fiercely.

The daily meals of lean chicken, fish, pasta and fresh vegetables won't be a surprise to the superfit. What marks out Ricky Hatton's whole diet is an intensive daily course of what he calls his "super magic shakes" - protein and other supplements from CNP Professional - and the insistence on drinking lots of water - upwards of four litres a day - even though many boxers fight shy of drinking plenty of water.

"For years boxers have cut down on food and water to reach target weights. That's completely the wrong attitude," argues Kerry Kayes. "Starving the body might burn fat to start with, but the body adapts and slows metabolism, and it actually becomes harder to lose weight. What's more, any lack of nutrients and water doesn't allow muscles to recover after training.

"As Ricky's training gets more intense nearer the fight he needs even more nutrients to help his body repair and recuperate from the positive stress of training. But he still has to lose weight to make the weigh-in. So he can't get all the nutrients from his food alone because then he'd end up taking in too many Kcalories. CNP protein supplements ensure that he gets the high amount of nutrients he needs in a low Kcalorie environment."

Kerry Kayes says his diet gives Ricky Hatton around 2,700Kcal, and just over 200g of complete protein daily. For training this allows the weight to drop off while nourishing and restoring the body after exercise - and developing peak physical fitness.

Ricky Hatton's match isn't the only one on May 24th that's using CNP and Kerry Kayes' expertise. Matthew Hatton, Ricky's brother, who is also under the Kayes nutrition program, is on the same bill, and will be battling the biggest fight of his career against Craig Watson for a Commonwealth Welterweight title.

Kerry Kayes emphasises that the Hatton diet is not only for professional sportsmen. "Anyone working to peak physical fitness can benefit," he says.

Paul Riley, Marketing Manager, CNP Professional: +44 (0)161 320 8145
Photography is available in a choice of formats on request from cnp(at)publicityworks.biz

Kerry Kayes, the founder of CNP Professional is a former national bodybuilding champion. He has been involved in sports nutrition for many years and his dietary expertise has established him as 'the man in the know' to sportspeople worldwide including boxer Ricky Hatton, Sean Long of St Helen's RLFC and David Dunn of Blackburn Rovers.

CNP Professional supplements are carefully formulated to ensure that the body is able to make best use of the nutrients. Unlike some protein supplements, CNP Professional's products are easy to drink - in fact, the Pro Slam only takes 5 seconds.

There are several articles explaining protein nutrition supplements on the CNP website - go to the home page and click on 'nutrition' under the articles section.

The Ricky Hatton training diet for the Lazcano match:

At the heart of the training /weight-loss Kerry Kayes approach is the CNP Professional 'Pro' range of protein supplements. It starts off in the morning with Pro CLA, capsules of a healthy fat that have been shown to help reduce bodyfat whilst retaining and possibly helping to increase muscle tissue.

For breakfast the sportsman enjoys Pro MR or Pro Peptide - blends of undenatured "fast and slow" proteins - sometimes with porridge, as well as Pro Vital (high strength multi-vitamin/mineral/antioxidant formula capsules) and Pro Lipid, an EFA supplement delivering unique ratios of Omega 3, 6 & 9 and cholesterol-lowering plant sterols. Around 45 mins before training, on leaving home, he will take Pro GF, a formula of creatine and nitric oxide which helps water hydrate the body during the workout.

Immediately before all hard exercise comes a serving of Pro Slam, a ready-to-drink vial that delivers 27 grams of protein without carbohydrates or fats in only 86ml. It comes in three delicious fruit flavours and can be drunk in seconds, delivering a 'tingle' that shows it's working quickly. Immediately after the workout Ricky takes a Pro Recover, a recovery drink containing fast-acting carbohydrates and proteins that aid muscle repair and growth, as well as antioxidants that help to limit the muscle damage caused by intense exercise.

If Ricky feels really hungry for a snack, he's advised to eat a Pro Flapjack, combining the complex carbohydrate of oats, with a high-protein blend, without the high sugar and fat content of most commercial products.

The biggest meal of the day usually comes in mid-afternoon, with chicken, fish or turkey accompanied by potatoes, rice or pasta, and - naturally - plenty of green vegetables, followed by relaxing to digest the meal properly.

An evening run is bookended by a Pro Slam before and a Pro Recover after the run, with more Pro Vital and Pro Lipid capsules during the evening, and Pro MR again shortly before bed, to ensure the body has nutrients to repair and recover during the night.