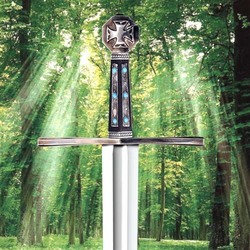 Atlanta Cutlery Corp. (ACC) & Museum Replicas Ltd., (MRL) today announced they will develop a range of prop collectibles and specialty products, including full-scale helmets, weapons, costumes and other props all inspired by Universal Pictures' epic action-adventure, Robin Hood, which arrives in theaters on May 14, 2010. The products are developed through a licensing agreement with Universal Partnerships & Licensing.

Museum Replicas has created the first collectible in the series - the Robin Hood Hero Sword. The hand-forged, fully tempered high carbon steel sword has exacting and meticulously replicated accents. For authenticity, it is made exactly as an original would have been created during the 13th century era, in which Robin Hood is set.

Museum Replicas worked directly with Simon Atherton, Master Armorer of the action-adventure, and created a replica based on the actual sword carried by Robin of Loxley as portrayed in the film. The sword includes a wooden display plaque with custom graphics. A copyright appears on the back of the wall plaque and on the blade of the sword, and a Certificate of Authenticity ensures it is the genuine sword.

The Robin Hood Hero Sword retails for $245, and it is now available in the United States primarily at specialty stores (both brick-and-mortar and online), including those specializing in movie collectibles and memorabilia, comic book stores, cutlery stores and prop stores. The sword will also be available via the Museum Replicas catalog, which reaches more than two million consumers annually. The entire collection, which includes beautiful clothing, armor, helmets and other swords may be viewed online at http://www.museumreplicas.com.

The Robin Hood collection can be seen in person at the Museum Replicas showroom located at 2147 Gees Mill Road, Conyers, GA 30013 and at their exhibitor booths at the San Diego Comic-Con International and Atlanta's Dragon*Con 2010.

About Robin Hood
Academy Award® winner Russell Crowe reunites with his blockbuster Gladiator director, filmmaking legend Ridley Scott, for the epic action-adventure Robin Hood. Joining with Oscar®-winning producer Brian Grazer and Oscar®-winning screenwriter Brian Helgeland, they tell the story of the legendary figure known by generations as "Robin Hood," whose exploits have endured in popular mythology and ignited the imagination of those who share his spirit of adventure and righteousness.

In 13th century England, Robin and his band of marauders confront corruption in a local village and challenge the crown to alter the balance of power between the king and all of his subjects. Whether outlaw or hero, one man from humble beginnings will become an eternal symbol of freedom for his people.

Robin Hood chronicles the life of an expert archer, previously interested only in self-preservation, from his service in King Richard I's army against the French. Upon Richard's death, Robin travels to Nottingham, a town suffering from the corruption of a despotic sheriff and crippling taxation, where he falls for the spirited widow Lady Marion (Cate Blanchett), a woman skeptical of the identity and motivations of this crusader from the forest. Hoping to earn the hand of Maid Marion and salvage the village, Robin assembles a gang whose lethal mercenary skills are matched only by its appetite for life.

With their country weakened from decades of war, embattled from the ineffective rule of the new king and vulnerable to insurgencies from within and threats from afar, Robin and his men heed a call to ever greater adventure. This unlikeliest of heroes and his allies set off to protect their country from slipping into bloody civil war and return glory to England once more. http://www.robinhoodthemovie.com

About Universal Partnerships & Licensing
UP&L oversees Universal's consumer product licensing, film and home entertainment promotions, and all corporate alliances for Universal's theatrical, home entertainment, theme parks and stage productions. This dedicated division is also responsible for monetizing the studio's vast library of films and characters through licensing, branding and marketing opportunities. UP&L is part of NBC Universal, one of the world's leading media and entertainment companies in the development, production, and marketing of entertainment, news, and information to a global audience. Formed in May 2004 through the combining of NBC and Vivendi Universal Entertainment, NBC Universal owns and operates a valuable portfolio of news and entertainment networks, a premier motion picture company, significant television production operations, a leading television stations group, and world-renowned theme parks. NBC Universal is 80%-owned by General Electric, with 20% owned by Vivendi.

About Museum Replicas
Museum Replicas Ltd. along with their partner company, Windlass Steelcrafts are recognized as a worldwide leader in the design, manufacture and marketing of fine collectible products. With headquarters in Conyers, Georgia they sell their products in over 14 countries around the world. Licenses include Marvel Comics, The Terminator, Assassin's Creed I and II, Star Wars, The Tudors, Frank Miller's 300, Wheel of Time, The Phantom, World of Warcraft, Age of Conan, The Lord of the Rings and Harry Potter.