An Evening of Sit Down with Robin Williams & David Steinberg Coming to DPAC, Durham Performing Arts Center January 26, 2013 -- Tickets on Sale Monday, November 12 at 10am

Robin Williams returns to Durham as he sits down to “chat” with his old friend, comedian, actor, writer, director, and author David Steinberg at DPAC, Durham Performing Arts Center, on Saturday, January 26, 2013. 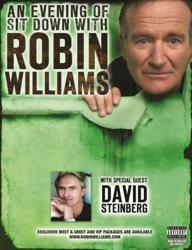 Robin Williams returns to Durham as he sits down to “chat” with his old friend, comedian, actor, writer, director, and author David Steinberg at DPAC, Durham Performing Arts Center, on Saturday, January 26, 2013.

Tickets go on sale Monday, November 12 at 10am:

An Academy Award-winning actor and multiple Grammy Award-winning performer unparalleled in the scope of his imagination, Robin Williams continues to add to his repertoire of indelible characters. Well known for his free-associative monologues and for pointing out life's absurdities through his astute social and political observations, Williams performed 90 shows in 65 cities before 300,000 fans over the course of his most recent stand-up tour. Born in Chicago and raised in both Michigan and California, he trained at New York's Juilliard School under John Houseman. It was in 1978 when Williams first captured the attention of the world as "Mork from Ork" on the hit television series, Mork & Mindy which ran on ABC for four seasons.

He then made his cinematic debut in 1980 when he starred as the title character in Robert Altman's Popeye. His additional film credits include The World According to Garp, Moscow on the Hudson, Good Morning Vietnam, Dead Poets Society, The Fisher King, Hook, Mrs. Doubtfire, Jumanji, The Birdcage, Good Will Hunting, Patch Adams and Night at the Museum. Williams takes great joy in supporting causes too numerous to identify. He has toured the Middle East four times to help raise morale among the troops and is perhaps best known philanthropically for his affiliation with "Comic Relief" which was founded in 1986 as a non-profit organization to help America's homeless. To date, the overall efforts of the "Comic Relief" organization have raised over $50 million. Robin Williams will be appearing along with David Steinberg for an evening of laughs at DPAC.

About DPAC
Since its opening in 2008, DPAC, the Durham Performing Arts Center, has become the center for live entertainment in the Triangle. Recognized for its contemporary design, DPAC features 2,700 seats, intimate sightlines and state-of-the art sound and video. Listed multiple times in the top 50 in Pollstar magazine’s worldwide theater attendance rankings, DPAC is currently the #4 ranked theater in the U.S.

What’s up next at DPAC? JERSEY BOYS, the 2006 Tony Award®-winning Best Musical about Rock and Roll Hall of Famers The Four Seasons: Frankie Valli, Bob Gaudio, Tommy DeVito and Nick Massi now until November 18. And Raleigh's own Clay Aiken will bring his Christmas special, Joyful Noise Tour, on November 29.