The Rottenstein Law Group, a da Vinci law firm, is cautiously monitoring recent Bloomberg news that the U.S. Food and Drug Administration is surveying hospitals about the safety of the da Vinci system, following an increase in incident reports. 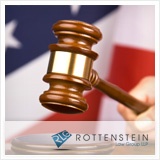 The da Vinci system was fast-tracked through the FDA’s 510k regulatory process in 2000.

The Rottenstein Law Group, a da Vinci law firm, is cautiously monitoring recent Bloomberg news* that the U.S. Food and Drug Administration is surveying hospitals about the safety of the da Vinci system, following an increase in incident reports, and assesses the probe's affect on lawsuits. On the Rottenstein Law Group’s website is a da Vinci Surgical System Legal Information Center, which provides background information and updates on news related to the device.

“The da Vinci system was fast-tracked through the FDA’s 510k regulatory process in 2000,” said Rochelle Rottenstein, principal of the Rottenstein Law Group. “This meant that it did not receive the level of scrutiny that perhaps it should have. However, that the FDA is conducting this survey is a sign that the agency is heading in the right direction.”

In addition to safety surveys, the FDA also asked surgeons about the most and least appropriate procedures for which to use the robots and to describe their training on the devices, the Bloomberg report said. The da Vinci performs precise procedures using robotic arms and a surgeon behind the controls.

"It's likely that anybody who was hurt in a surgery where the surgeon used the da Vinci might sue, and the simple fact of an FDA inquiry alone doesn't mean liability on the part of the manufacturer," Rottenstein said. "Nevertheless, the findings of the FDA certainly could become evidence in a future trial. Depending on what the findings are, this evidence could benefit the plaintiff or the defendant."

Surgeon training and other issues have played a role in making the da Vinci the subject of major lawsuits, including a March 2012 lawsuit involving a Bronx woman who died after receiving a hysterectomy via the da Vinci (Case No. 1:2012-cv-02597 in the United States Circuit Court for the Southern District of New York). Surgeons in hospitals across the country have performed more than 250,000 hysterectomies and prostate removal surgeries using the device, according to the Chicago Tribune.** In 2012, the da Vinci generated more than $2 billion in revenue for manufacturer Intuitive Surgical Inc., according to Bloomberg.

Rottenstein said that despite a growing number of lawsuits, the U.S. Joint Panel on Multidistrict Litigation denied a motion by plaintiffs in four jurisdictions to consolidate pretrial processes at a federal level (MDL-2381). According to court documents, she said, the individual lawsuits did not share enough common questions of fact, and in addition the parties did not provide enough evidence that the discovery process and pretrial proceedings would overlap.

Hospitals around the country used the $1.5 million machines for about 500,000 surgeries last year, according to Bloomberg. Reported side effects from the four-armed device include burns and lacerations to organs and blood vessels.

The Rottenstein Law Group, which represents clients who believe they have been harmed by the da Vinci robotic surgical system, encourages people to visit the firm’s da Vinci lawsuits page to download a free brochure to help them determine if they have a case.