The Writer's Coffee Shop Publishing House is excited to announce that T.M. Franklin, author of MORE will be signing copies of her book at the Burien Books on May 11, 2013. MORE is the young adult, paranormal romance that has critics raving. 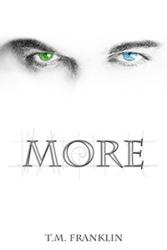 Pierce County author T.M. Franklin will be signing copies of her novel, MORE, at Burien Books on May 11, 2013, from 1:00-3:00 p.m. It’s her first signing in Western Washington, and Franklin is excited it’s going to be at a neighborhood book store like Burien Books.

“There’s so much talk about buying books online these days, and some say the brick and mortar book store is on the way out,” Franklin says. “But there’s nothing like running your fingers down the shelf and pulling an actual book out and flipping through the pages. And for authors like me to be able to interact with readers in person is something that you just can’t replicate online.”

Apparently, the marketplace agrees. The American Booksellers Association recently announced that it added 43 new independent bookstores to its ranks in 2012.

“It’s exciting to see independent book stores like Burien Books thriving,” Franklin says. “As an author who’s chosen to work with an independent publisher, I think we’re a perfect match!”

Allison Lee-Moore, owner of Burien Books thinks Franklin and MORE have a lot to offer her customers. “This book is suspenseful action adventure entwined with sincere heartfelt love story following two very memorable characters,” she says. “For those that want more, have no fear, MORE is book one of a trilogy.”

In MORE, Franklin wanted to create a unique story that would transport her readers to that place of dreams and wonderment that we often leave behind as we become adults. “I think everybody thought maybe they had super powers when they were kids. We all had that moment when we just knew we could fly or make things move with our minds if we only tried hard enough. I wanted to write a story where it was true,” says Franklin.

“I would never have guessed that this was T.M. Franklin's first full length published novel,” Lee-Moore says. “I quickly became absorbed into the story line and it kept up the suspense and intrigue until the very end. Though officially a young adult novel, MORE has more presence and appeal to a larger body of readers. Ava the protagonist is a likable character lacking the irritating teenage angst/queen bee mentality of other popular but limited paranormal characters. Franklin has made her a real person that we are invited to travel with, as her full potential unfolds during an incredible journey of self discovery.”

Ava Michaels used to think she was special. As a child, she fantasized about having magical powers . . . making things happen. But Ava grew up and eventually accepted the fact that her childish dreams were just that, and maybe a normal life wasn't so bad after all.

Now a young college student, Ava meets Caleb Foster, a brilliant and mysterious man who’s supposed to help her pass Physics, but in reality has another mission in mind. What he shows Ava challenges her view of the world, shaking it to its very core. Because Caleb isn't quite what he seems. In fact, he's not entirely human, and he's not the only one.

Together, the duo faces a threat from an ancient race bound to protect humans, but only after protecting their own secrets—secrets they fear Ava may expose. Fighting to survive, Ava soon learns she's not actually normal . . . she's not even just special.

T.M. Franklin started out her career writing non-fiction in a television newsroom. Graduating with a B.A. in communications specializing in broadcast journalism and production from Central Washington University, she worked for nine years as a major market television news producer, and garnered two regional Emmy Awards, before she resigned to be a full-time mom and part-time freelance writer. After writing and unsuccessfully querying a novel that she now admits, “is not that great,” she decided to follow the advice of one of the agents who turned her down—write some more and get better at it. Her first published novel, MORE, was born during National Novel Writing month, a challenge to write a novel in thirty days.

The sequel to MORE, The Guardians, will be released this fall. In addition, Franklin is the author of Amazon best-selling short story, Window, and A Piece of Cake, part of the Romantic Interludes anthology.

She lives in the Pacific Northwest with her husband, Mike, is mom to two boys, Justin and Ryan, and has an enormous black dog named Rocky who’s always lying nearby while she’s writing. Whether he’s soothed by the clicking of the computer keys or just waiting for someone to rub his belly is up for debate.

The Writer’s Coffee Shop Publishing (TWCS) House is an up and coming independent publisher based in New South Wales, Australia. They recently gained a great deal of attention with Fifty Shades of Grey, the international literary sensation they released in June 2011 and is now represented by Random House.