BBQ Voters to Pick the President with Straw Poll

Key Remaining Undecided Group Will Decide the Outcome of the 2012 Presidential Election at PorkBarrelBBQ.com/PickThePrez 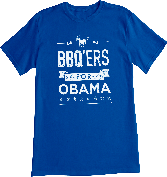 The BBQ Voter is the key remaining undecided vote in critical swing states like Virginia, Ohio, Florida and North Carolina, and the candidates would be wise to target the BBQ Voter in the remaining days of the election. ~ Heath Hall

Washington, D.C.’s Pork Barrel BBQ today announced America’s first of its kind, and indisputably accurate, straw poll that experts believe will predict the outcome of the 2012 Presidential Election. As the campaign’s battle over the remaining undecided voters, political pundits have given a new name to this critical remaining swing voter – The BBQ Voter.

BBQ’ers across America are encouraged to participate in what could be 2012’s most definitive Presidential Straw Poll that is sure to have both candidates hoping the results show them smoking their competition. Voters will cast their votes through the purchase of BBQ’ers for Obama and BBQ’ers for Romney t-shirts and bumper stickers being sold online at PorkBarrelBBQ.com/PickThePrez. Each t-shirt or bumper sticker purchase equals one vote for the candidate. Votes cast in Pork Barrel BBQ’s official BBQ’ers Presidential Straw Poll will be calculated weekly and posted on http://www.PorkBarrelBBQ.com.