The Rottenstein Law Group, which represents clients with claims stemming from the recall of defective hip replacement devices manufactured and sold by DePuy Orthopaedics, tallies the number of federal lawsuits filed over the DePuy ASR hips at close to 6,000 just three months after the second anniversary of the recall. 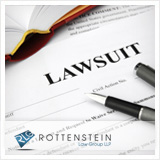 By RLG’s count, as of November 1, 2012, 5,855 individual federal lawsuits against DePuy alleging harms caused by the company’s ASR hip implant devices have been consolidated in the multidistrict litigation pending in the Northern District of Ohio before Judge David Katz (MDL no. 2197). The multidistrict litigation was first created in December 2010 by the United States Panel on Multidistrict Litigation. Johnson & Johnson subsidiary DePuy Orthopaedics, manufacturer of the embattled ASR systems, had publically announced a recall of the company’s ASR Hip Resurfacing System and the ASR XL Acetabular System on August 24, 2010.

The first trials of lawsuits brought by plaintiffs alleging harm caused by DePuy ASR hip replacement devices are expected to begin before the end of this year. Rochelle Rottenstein, principal of the Rottenstein Law Group, says, “We implore anyone with a friend or relative who has received a hip replacement device since 2003 to reach out to that person and recommend that he or she consult a physician immediately and then speak to a qualified personal injury lawyer.”

The Rottenstein Law Group maintains a DePuy ASR Lawsuit Information Page at http://www.rotlaw.com/depuy-asr/. The site has features that allow for easy sharing, including links for automatic posting on Facebook and Twitter, specifically to enable visitors to spread the word about the DePuy ASR recall. (Attorney advertising. Prior results do not guarantee a similar outcome.)

About THE ROTTENSTEIN LAW GROUP
The Rottenstein Law Group is a New York-based law firm that represents clients nationwide in mass tort actions. The firm was founded by Rochelle Rottenstein, who has more than two decades of experience as a lawyer, to represent clients hurt by defective medical devices. http://www.rotlaw.com