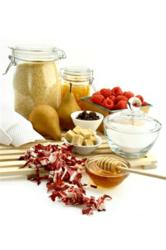 Michelangelo and oil paint. Beethoven and the piano. Salad makers and radicchio. Every artist has a signature tool for creating masterpieces. This sassy Italian redhead's arrival on the American salad scene is a sign that we're ready for bigger, bolder flavors.

Now, American ingenuity in the kitchen is taking radicchio beyond the traditional tossed salad. This is tasteful news, as radicchio's bold flavor is an ideal foil for myriad other ingredients and flavors.

When you add cooking—which alters radicchio's assertiveness—there are six approaches for serving radicchio. "And when you use many ingredients, exponentially there are endless ways of serving this vibrant, sturdy vegetable from Italy," she said.

Flavor Partners for Radicchio
SALT: This everyday ingredient is critical for highlighting many other flavors. Indeed, many foods would taste flat or bland without a touch of salt. Salt masks some of the assertive bitterness of radicchio, and adds its own salty magic to the eating experience.

"Salt acts as a filter on the palate for bitter flavors," said Dr. Ken Prusa, food scientist and professor of product development at Iowa State University. "So combining a bitter flavor with salt pleases the palate."

Common salty ingredients include table salt, sea salt, soy sauce, Worcestershire sauce and a wide variety of condiments. Salty foods to pair with radicchio might include olives, salty cheeses such as feta or Parmesan, cured meats such as ham or prosciutto, salted nuts, anchovies and capers.

Sour ingredients are found everywhere in the kitchen. Beyond the obvious and essential vinegar and lemon juice, think about fermented dairy products like buttermilk and sour cream, cured and aged meats such as prosciutto, some salamis and sausages, tart fruits such as carambola (starfruit) or green apples, and wine.

Anthocyanins, the group of compounds that gives radicchio its deep cherry-red color, are maintained—and radicchio's red color—with the addition of acid, according to Shirley Corriher, food scientist and author of CookWise. So sour ingredients are important to taste, and also serve to maintain radicchio's vibrant color.

SWEET: "Sweet and bitter is a match made in culinary heaven," said Kline. "Anyone who appreciates a piece of chocolate understands this. One flavor enhances the other, bringing out the best in both."

FAT: Bitter compounds, according to Prusa, are attracted to fat molecules, actually binding with them. So ingredients with a high percentage of fat will act as a buffer for bitter flavors.

"Oil and vinegar are the 'yin-and-yang' of the kitchen. We can't imagine a vinaigrette or salad dressing without oil: It's a similar situation with oil and the bitterness in radicchio" said Kline. "Oil and other fatty foods, used with restraint, are perfect partners with radicchio. Not only does fat surround the bitter flavor compounds, mellowing them, but also the clean, bitter flavors in radicchio cut the unctuousness of some fatty ingredients like smoked salmon, making an extremely pleasing flavor combo."

Fat ingredients include oils--both neutral in flavor such as vegetable, peanut or grape seed and flavored oils such as walnut and extra-virgin olive oils; butter and rich dairy products such as heavy cream, sour cream and rich cheeses like triple crème or camembert; avocado, bacon, and oily fish such as smoked salmon.

PUNGENT: Many foods we enjoy every day, and use commonly as ingredients, such as mustard, are pungent. "Pungency is usually a complicated set of flavors and elements in a food that result in biting, acrid, sharp and strong flavors," said Kline.

There are many foods with pungent flavors with which to pair radicchio. Pungent flavors are found in mustards, anchovies, many ripe cheeses such as blue cheeses; any smoky food such as smoked cheeses, bacon and other smoked meats, smoked fish; cured olives, especially dry-cured; horseradish; sulfurous vegetables such as onion and garlic; freshly ground black pepper.

COOKING: As any cook knows, but maybe doesn't really think about, is that cooking any food dramatically alters it. According to Harold McGee, food scientist and author of On Food and Cooking, "every cooking method has its own unique influence on any food, including altering its flavor compounds."

"The bright, bitter flavors in radicchio are mellowed by cooking," Kline agreed. "We all love radicchio in its raw state, dressed so many delicious ways, but cooking radicchio seems to be a savory culinary secret that needs to be shared."

Roasting radicchio, as Los Angeles Times food editor and author of How To Read A French Fry Russ Parsons discovered, "drives off much of the bitterness in radicchio, leaving a sweet vegetable with an intriguing edge."

"With flavors that harmonize so beautifully together, you have a dish that tastes like more than the sum of its parts," said Kline. "That's not only synergy, that's good cooking!"

Background on Royal Rose The Company:
The “Salad Bowl of the World” gained some much-needed color, flavor and crunch in 1993 with the formation of Royal Rose Radicchio of Salinas, Calif. It proved to be the perfect combination Old World vegetable meets New World agriculture power and the results have been delicious.

Royal Rose took to growing and shipping four varieties of radicchio, a member of the chicory family that is revered in Italy and throughout Europe as a fresh, zesty addition to salads, pastas, pizzas and more. The vibrant color, pleasing bitterness and unmistakable crunch come together to form a unique addition to any meal.

It all started when Italian farmers Lucio Gomiero and Carlo Boscolo teamed up with Salinas Valley growers in the late 1980s. Gomiero, a winemaker by trade, had the idea of bringing Boscolo’s proprietary seed varieties and 50 years of radicchio growing in Italy to the United States. Gomiero believed there was a new market for this unique and versatile vegetable.

With the packaged salad revolution about to explode, the timing couldn’t have been better. Royal Rose turned a seasonal vegetable into a year-round treat, following the sun through four growing regions to supply the growing market with field-fresh radicchio.

Led by company president Dennis Donohue (who also happens to be current mayor of Salinas), Royal Rose’s Fresher-Bigger-Better program reflects an ongoing commitment to educating consumers about the vegetable’s versatility and freshness.

Royal Rose is also committed to education. Its new marketing campaign “What's A Salad Without Radicchio?” reflects an ongoing commitment to promoting and popularizing radicchio.

Radicchio has begun to enjoy mainstream acceptance by consumers. McDonald’s now includes radicchio in its premium salads in many markets, and chefs all over the country have come to look beyond the salad, holding the versatile vegetable in high esteem and using it raw, grilled or sautéed and in a variety of specialized dishes.

Additional Tips
Seedless grapes can be substituted for orange slices.