Ruby Thomas Announces the Release of ‘The American Dream’ 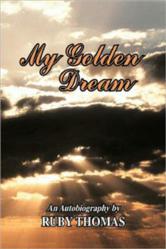 Whether young or old, you can still dream A Golden Dream, and you can say you are on top of the world and nothing is a hindrance to your success

“The mist always lingered around the tops of the mountains.” With these words Ruby Thomas begins a tender journey down memory lane in her sweeping debut, “My Golden Dream: An Autobiography” (published by Trafford Publishing). Depicting her childhood in Nueva Vizcaya, the Philippines and her eventual migration to the U.S., Thomas presents a literary offering that dives into the veracity of first generation Americans.

Thomas begins her remembrance in her home city of Bayombong, the capital municipality of Nueva Vizcaya, as she attends her mother’s funeral. At 4 years of age, Thomas is filled with wonder and confusion.

“When she died of some unknown thing brought by the war with Japan,” she writes, “my elegant mother left behind four daughters. Following her death the family would abandon our home to hide in a nipa hut by the river, just out of sight of the Japanese soldiers. We lived there in the hut with a hole in the floor which gave way to a cave and safe passage to the river. It was both a safeguard and a frightening reminder that we were not safe.”

Thomas continued to experience turbulence in her young life as her country weathered the storm of Japan’s war efforts. Yet, “the dream of America” was never far from mind.

“My father went to work for the United States Army and our little nipa hut down by the river was full of American soldiers,” she remembers. “A big, long hall under my father’s house housed them, too. I remember the American soldiers would carry me high on their shoulders. They were giants who came to rescue us from the Japanese army.”

Thomas is the only nerve and muscle practitioner in the medical field, trained by the navy in Germany, and registered under the Bureau of Physical Therapy in Harrisburg, Pennsylvania. It’s now been over 40 years that she helped many people, be it mental, physical or emotional. Thomas did this without drugs, and so this has inspired her to keep working instead of retiring. She’s also the second woman from the Philippines to write a memoir that was registered by the Library of Congress, D.C.

“I think my book, My Golden Dream, is inspirational, educational, sensational and a survival story for young and old and this book tells how I became successful in life because of my dreams. Success starts as a dream, and that dream turns to challenges and those challenges change from day to day. Each one lending us a vision, to guide us on our way, with patience, perseverance, faith, hope, love, passion, caring, discipline, respect, honesty and endurance in what you are doing. Adding a common sense, you can fulfill what you’re seeking in life.” Where there’s life, there’s hope! Life is what you make it! Live a life of no regrets!

Whether young or old, you can still dream A Golden Dream, and you can say you are on top of the world and nothing is a hindrance to your success.

About the Author
Ruby Thomas is the owner of Holistic Health Center in Clairton, Pa. Before becoming a business owner, she was a physical therapist for the U.S. Navy. Thomas met her second husband, the late Clarence Thomas, while he served as a doctor in the Navy. They were married for 38 years. Together, they served as president of their local Lion’s Club. Thomas is a proud mother and grandmother. For more information, visit http://www.rubyshealthcentre.com.