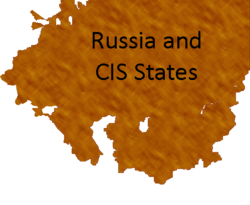 NRG Expert has published two key pieces of research on the natural gas market and Russia - the Global Energy Almanac and the Global Guide to Natural Gas Utilities Report. Their market research reveals that Russia is the largest exporter of natural gas with 23% of the world’s proven natural gas.[2]

Research completed by NRG Expert also reveals that Gazprom, Russia’s largest energy company, now not only provides 80% of Russia’s natural gas but is also starting to dominate the European market [5]. Gazprom has a monopoly on Russia’s natural gas pipelines and an exclusive right to export natural gas.[4] This has enabled the Gazprom shares to be now worth a staggering $115 Billion [5]. Some go as far as to refer to Russia as an ‘Energy superpower’ due to the size of its oil and gas industry.[6]

To help companies and governments understand all the vital energy statistics for Russia and the CIS, NRG Expert has published the Global Energy Almanac. This is an interactive energy database which contains all the essential energy statistics for Russia and the CIS (as well as the rest of the globe). In particular, the database highlights all the vital energy data on Russian gas, electricity, water, petroleum and biofuels.

It then goes on to provide other key energy statistics on Russia and the CIS in terms of water, electricity, petroleum, biofuels and renewables.

NRG Expert is a London and Toronto based energy market research publisher. NRG Expert provides up to date energy statistics and analysis of worldwide energy markets, including electricity, natural gas, coal, nuclear, renewable energy, water and waste, and all elements of energy infrastructure.

To find out more about NRG Expert and the Global Energy Almanac please visit http://www.NRGExpert.com.